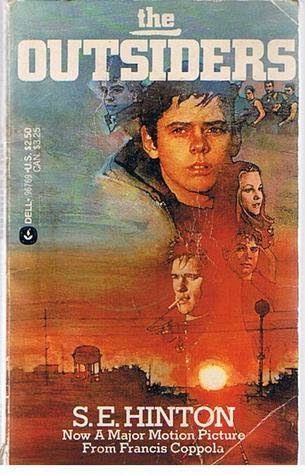 Here's another book/movie combination that deserves a look from both angles.  I first read the book in grade school or junior high, I'm not sure when.  I was captivated by the story, the simplicity of the characters and the depth of their emotions.  Then I would watch the movie, way after it's release in 1983, and enjoy it that way as well.  But that was a long time ago, and I haven't picked up the book or check out the film in quite some time.  I was ready for a revisiting, and I'm glad I gave it the time.  It's a short novel, doesn't take much work to get through, doesn't require much from the reader.  But what it gives is so much greater than what the reader has to invest.  It's a story that you feel privileged to have come across, one that sticks with you when you leave.

Ponyboy Curtis (yes that's his real name) is a Greaser.  He and his gang of brothers & might-as-well-be-brothers roam the streets of their side of town, smoking, drinking, robbing, slicking back their hair, and generally throwing it in the face of society.  Their counterparts, the Socs, inhabit the other half of town, going to their parties and spending their parents' money.  When the two groups cross paths a rumble usually ensues.  But when Ponyboy and his friend Johnny get jumped, a line is crossed, and someone gets hurt.  The boys, who are sensitive in a way the other Greasers can't seem to understand, not even Pony's brothers Soda & Darry, leave town to hide out in the country until things blow over.  But trouble can't be left behind that easily, as the pair soon learn.  They still have to face the law, the Socs, and their own fears, as youth marches on towards adulthood with no promise of a bright future.

There's a Robert Frost poem embedded in the book and it really sets the tone for the feeling of the story.  I won't write it here, but when you read it you'll know.  It reminds us that innocence is fleeting, that the choices you make early in your life can affect your future, that nothing stays unchanged.  That's the general message of the book, and it's well delivered.  The actual writing is fairly straightforward, a little choppy, but it represents the characters and the storyteller very well.  You're left with a nostalgic feeling for a life you didn't lead, and you end up connecting with boys whose lives are nothing like your own.  That's a sign that the book works, that it gets you and grabs you, even if you can't exactly understand why.  If you checked out this book in school but have forgotten it since, give it another try.  It might have a greater impact on the young, but it's never too late to read a classic, especially one that speaks as clearly as this does.