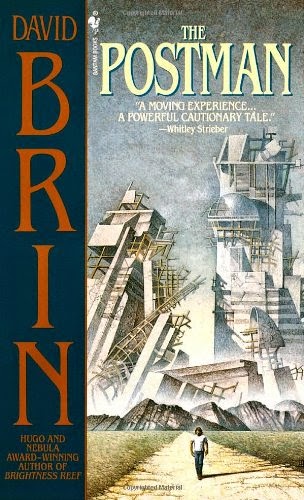 
As a film critic I watch a lot of movies before I read the books that they were based on.  But as a bibliophile, I enjoy going back and reading the original text.  It's entertaining to compare the two, choose a favorite, come away with multiple versions of the same story.  In this case, I've seen The Postman starring Kevin Costner many times and always enjoyed it.  Now, it's not an amazing film, but I have a weakness for post-apocalyptic movies, even when they're not great.  And I actually think Costner fits the role of the title character well, which is a must because he can't really act.  Anyway, the movie is a little silly, a little cheesy, a little simple, but likable.  You can say that same about the book.  It's not impressive, not really that well done, but it's fun to read.  I flew through it while on vacation; it's that type of story, a grab-your-attention novel, but one that can't withstand too much close scrutiny.

In the near future the world as we know it ceases to exist.  War, climate change, societal breakdown, you name it.  Cities, industry, communication; it's all gone and people are left to fend for themselves.  Small villages cling to life, becoming close-knit communities where everyone pitches in, and where outsiders are not welcome.  And in the background are the Holnists, extreme survivalists who terrorize these tiny hamlets, counting on military experience to survive.  But our title hero isn't part of either of these groups.  He's a loner, a traveling bard, as it were, staying alive by trading stories and plays for food and shelter.  But things change when he stumbles across a postal vehicle, filled with old letters and a dead postman.  Taking his uniform and his cargo, the drifter becomes something of a messenger when he begins to fabricate a tale of hope, a lie about the Restored United States that just might be what the people of a broken land need in order to come together as a country once more.  His adventures are just beginning though, as he treks north in search of a fabled supercomputer, fighting survival groups and weaving his own make-believe stories as he goes.

It's a cool concept more than anything else.  The book is set in Oregon, and the countryside is wild and beautiful.  It's a great backdrop for a exciting story, one of government collapse and riots and militias and the disappearance of technology.  If you love the post-apocalyptic vibe you'll enjoy this novel.  But it's not all roses.  Brin comes off as an amateur writer, someone who sticks in cliches because he doesn't know what else to say.  The story is strong, but the writing is weak, creating a book that's so-so in a lot of ways.  Comparing it to the movie, you see a ton of differences.  The movie plays up the battle between the Postman and the Holnists, even having him join their ranks for a while.  The book focuses more on the development of a new society and how the extremists are in the way of progress.  And then there's the whole supercomputer thing, which isn't in the film but plays a major role in the book.  That surprised me, but in a good way, as it was just another look at the fictional collapse.  All in all, a mediocre book that I enjoyed reading despite writing flaws.  A good page-turner, if you don't over-analyze it, and in that way very similar to the movie version.