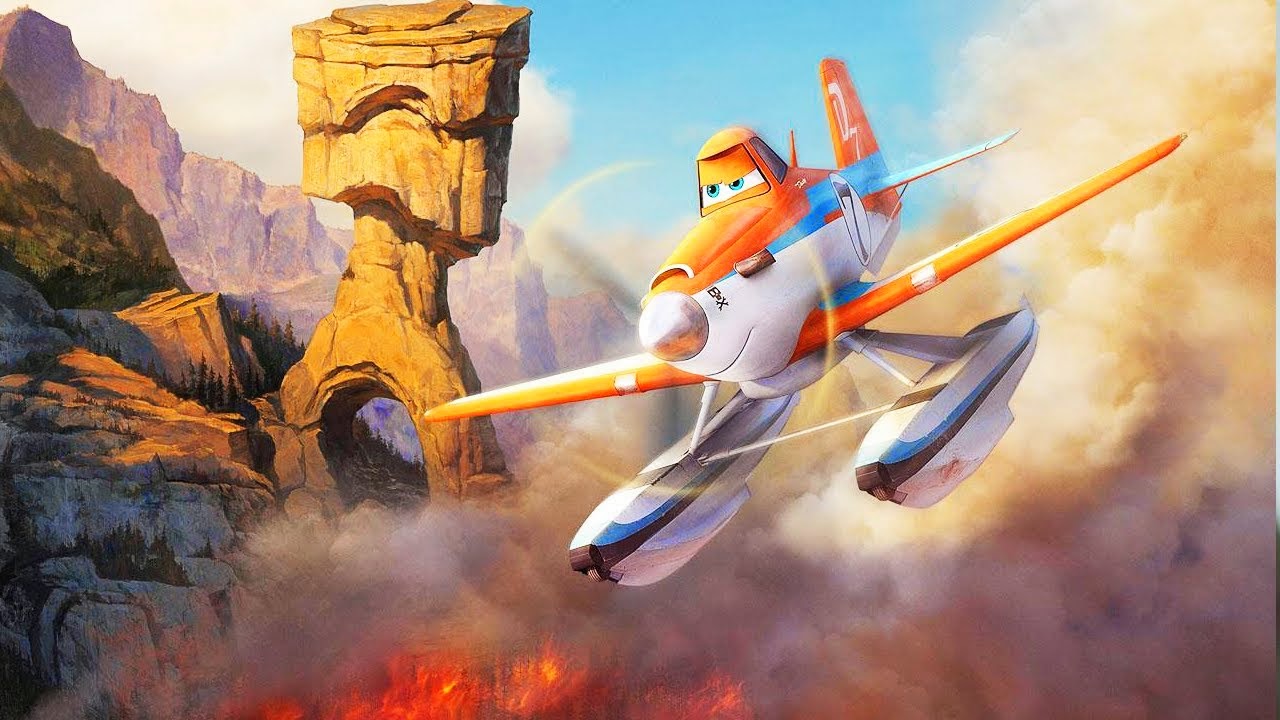 
If you read my review of Planes you'll know I wasn't a big fan.  I ended up giving it a 3-star rating, barely enjoying the visuals & the animation enough to forgive the recycled story and bad voice-overs.  It was basically just Cars in the air, and while I liked Cars I wasn't really wanting to watch the exact same thing again.  And this time the heart and the music were both missing, leaving audiences with something that was cool to look at but not that great to watch.  Well, thankfully I gave Planes 2 a chance to redeem the franchise.  I took my daughter to see her first night-time movie, and also her first advanced screening.  Perhaps we should become a famous father/daughter film critic pair, because we both had an excellent time, enjoyed comparing the sequel to the original, and came away with a much more positive outlook on a series that I was about to write off.

Dusty is now a famous racer and has returned to his hometown (sound familiar?).  He continues to win race after race and is the envy of the flying world.  But when he encounters a small problem with his gear box it turns into a major issue.  The part is barely broken but can't be replaced, forcing Dusty to pull back his speed, stay behind the red line, and basically stop flying fast.  He's devastated, obviously, but there may just be a new role waiting for him to scoop it up.  The town needs another firefighter to compliment their ancient firetruck, otherwise their landing strip will be shut down.  Dusty flies off, slowly, to find Blade, the legendary firefighting helicopter that patrols the forests with his team of dare devils.  Dusty is in way over his head, as his ego and his inability to tell the truth about his new limitations will put he and his team in jeopardy when it counts the most.  Fighting wildfires is no game, and Dusty must learn that the hard way or else.

Fire & Rescue delivered everything that was missing from the original.  It had actual emotions, gasp, and it asked its actors to actually try to convey some feeling instead of just reading the stupid lines from the script and heading back to the buffet.  The heart that should have been there in the first was here in the second, and you rooted for the characters in a way you wish you could have before.  And so the planes felt real, letting you forget they were machines, allowing them to personify much more completely and believably.  That's what Cars was able to deliver; vehicles that felt like people.  Planes couldn't pull it off, but this one could.  And then there's the firemen/patriotic/heroic aspect.  I'm not all that mushy and I don't really care about the message of helping others that the film conveyed, but it was there if that's your thing and it was just slightly touching that Dusty learned from his mistakes and began understanding the value of those around him.

It wasn't all perfect of course, and there were some reminders that this was a kids movie first and foremost.  Physical humor, fart jokes, flirting planes; sometimes the dialogue got a little silly, but what can you expect?  As an adult you have to slog through that, occasionally bumping into a joke that reminds you what it feels like to be seven again and causing you to crack up.  Overall the dialogue wasn't stellar, but it was at least a step up from the banality that was the plot of the first film.  Even Dane Cook improved, although he couldn't have done much worse.  He at least sounded like he cared, and Ed Harris as Blade was an even-keeled straight man that kept the plot level when it could have gotten out of hand.  I don't understand the poor reviews from the majority; if you saw the first, how can you not be glad to have seen something so much better?  And if you brought your kid to the showing, how could you not at least enjoy it a little bit as a child would?  This isn't the greatest animated movie you'll see this year, but it is a major step up and an entertaining way to spend an evening.