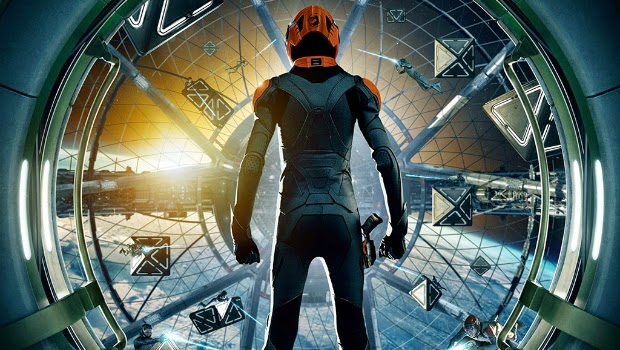 
I love sci-fi but somehow I missed reading this novel.  Orson Scott Card wrote Ender's Game as a short story, elaborated it later into a novel, and then would go on to write a series of books based on the character of Ender and the futuristic world in which he lives.  It took nearly thirty years to produce a movie based on this classic story; perhaps the technology needed wasn't available until now.  It's a highly militarized movie, set in outer space for the majority, featuring spacecraft, advanced weapons, zero gravity, an alien race, and the fictional technology of the future.  As a sci-fi buff, I appreciated the time & effort put into making the film visually appealing and scientifically interesting.  But as a film critic, I was appalled by the number of times I found myself saying, "Well that was stupid."

Earth has come under attack.  A species of alien insect has bombarded the planet, attempting to claim it as their own space, and millions of humans have died.  Humanity managed to push back the bug, but the war was devastating and a unified Earth has vowed that they will never be found unprepared ever again.  Flash forward to a world in which human children are trained from birth to be master strategists, to compete in games that test there skill at war, a test that hopes to find the best of the best and claim them for the defense of the world.  Ender is such a child, a boy whose military I.Q. is off the charts.  So he's drafted, so to speak, sent into space, and taught to execute a battle plan and to lead men.  The problem is he's just a kid, and annihilating an alien race is not something he can do out of hand.  He must learn to harness his ability, control his temper, and grow up fast if he's to help win the war once and for all.

It's a cool plot and I'd like to go back and read the novel.  It has a Harry Potter feel, but set in space, and of course it was written far earlier.  But as far as the movie goes, it was a complete failure.  Every line of dialogue seemed hand-crafted to make the character look like an idiot, to embarrass them with words that no real person would ever say.  The flow of the film was bumpy, nonsensical, and amateur, resulting in a terrible feel that never improved.  And the actors themselves didn't help bring the poor dialogue to life.  Every one of them was terrible, from Butterfield's unbelievable mannerisms to Ford's constant anger.  Abigail Breslin was probably the worst of the bunch; at one point I thought she must be a double-agent robot or something, her lines were delivered so awfully.  Everything that could go wrong did, taking what I assume is a fascinating book and turning it into a crappy movie version that failed in every way.  Maybe you have to be eleven to enjoy it, or at least able to forgive every flaw imaginable.  I certainly couldn't get past the glaring mistakes and bad acting, and I wouldn't recommend that you try.