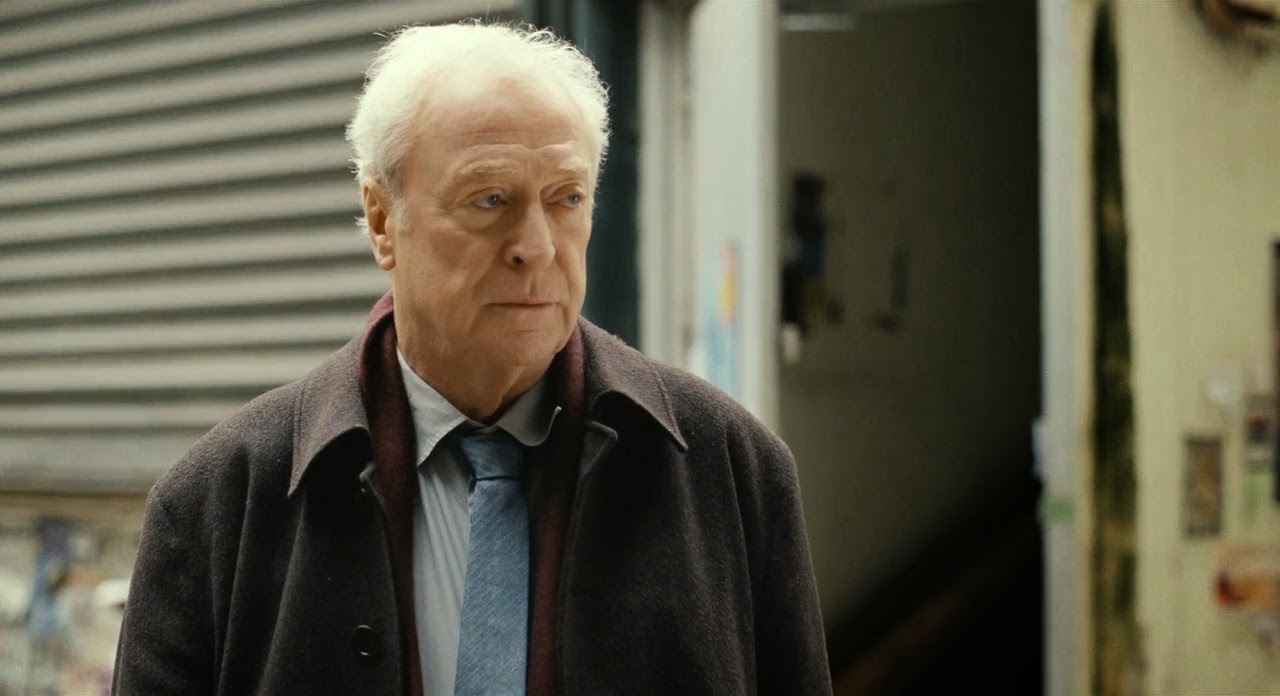 
It's not often you see bad work done by Michael Caine.  He's just too naturally gifted an actor, too strong in his roles.  And he's done so many over the years, varied parts that almost always come across the screen and blow audiences away.  In his younger days: Zulu, Alfie, The Man Who Would Be King, A Bridge Too Far.  More recently: Noises Off, The Cider House Rules, Quills, Batman Begins, The Prestige, The Dark Knight.  He just doesn't often make a misstep; choosing his characters with a discerning eye, playing them to perfection, and delivering in top-notch films.  That's why it's so surprising to see a weak Michael Caine in a weak movie, a shock that a character seemingly tailored to fit him comes off as unbelievable, throw-away, and just plain bad. 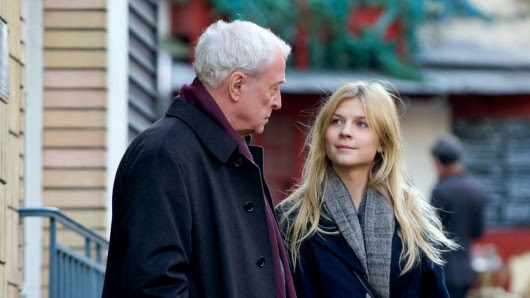 Matthew Morgan is a sad old man.  He's an American living in Paris who doesn't speak the language and has no plans to learn it.  It is both a winter month and the winter of his life.  His children live back in the States, he is retired from his career, he has no passions whatsoever, and his wife has just died.  She was his entire existence, his one reason for living, and without her Matthew floats through each day wondering why he's alive.  He goes to lunch, he takes bus rides, he reads his books, and he wonders why his beloved companion of so many years was taken away from him, why he is still on Earth when the world means nothing to him.

But things begin to look up when Matthew meets Pauline.  It's an accidental meeting on a random bus, and yet it feels to both of them as if they are connected in some way, as if they can help each other out of the dull existence of their current lives.  But the romance of the situation is short lived and reality comes crashing down.  And after a stay in the hospital, Matthew's grown children come to see him, to convince him to move on, to reconcile, something, anything.  His son is dealing with problems of his own, and meeting Pauline might affect his crisis as well, as she just seems to change the mood of the room she's in, to light up your life with such simple and yet beautiful ways.  Life in Paris will never be the same for Matthew, for his son, or for Pauline since meeting each other. 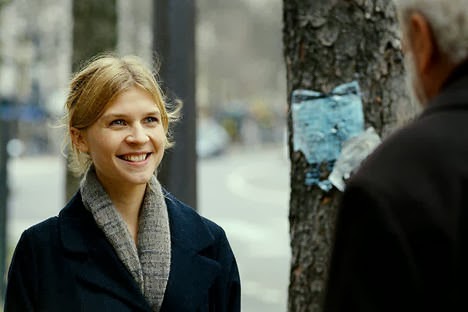 From the very beginning Last Love feels fake.  Nothing about it comes across as genuine or original, realistic or touching.  It's a recycled plot that fails to tug at our hearts the way it's supposed to, making the story seem cheap rather than deep.  The whole meet-a-random-stranger-who-will-change-my-life thing is boring, not to mention unbelievable.  The main character could have worked through his problems in so many other ways, could have reconnected with his son through some organic means.  He didn't need to meet a helpful French girl who was looking to fix some old man.  It made her feel like an outsider in the story, like an angel perhaps, but not a real person.  And had they gone that direction maybe the film would have come off as cheesy but heart-warming.  But they didn't, Pauline was just a woman, and so we're back to feeling disconnected and little skeptical.

Some amazing acting could have helped cover up some of the flaws of the plot, but surprisingly Caine wasn't up to the task.  I was shocked that he did such a poor job, that his character seemed so forced, so fake, that I never believed him as Matthew Morgan.  He's usually just so strong, but this time everything was wrong.  His odd, manufactured American accent, his clipped way of speaking, his heartless interactions with those around him; every detail was bad, a shockingly poor performance from an excellent actor.  And neither Poesy or Kirk really stepped up to fill the void; they were fine but not great.  No, this was Michael Caine's movie to make or break, and somehow he broke it, failing to produce a believable or relatable man.

There aren't many positives to cling onto when searching for something nice to say about this film.  At times the relationship between father & son was interesting, or at least made you feel something.  And the high emotion of the movie got you to at least consider your own life, your own love, to wonder how you would fare in a similar situation.  But overall it was a very dreary two hours spent watching Last Love.  There were just so many negatives: the slow pace of the film, Caine's bad accent, music throughout that never really matched the mood of the moment, Poesy's poor dancing when she's supposed to be a dancing instructor.  The actors, the director (who also wrote the adapted screenplay); everyone put forth a weak effort, creating a final product that was hard to sit through, over-heavy, not polished, and not recommendable. 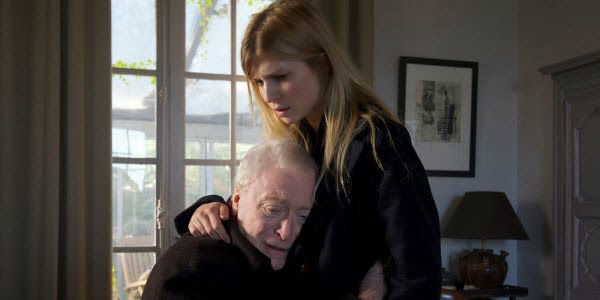 Video - With an aspect ratio of 1.85:1 Widescreen, the video of the film was quite nice; crisp, clean, with a good color balance, and enjoyable to view.  The winter drudge of a big city didn't lend itself to a lot of stunning visuals, but the hue of the scenes lent itself to the feel of the movie.  The film was shot using Arricam cameras and Zeiss Ultra Prime and Angenieux Optimo lenses.  The picture quality was high, if not remarkable.

Audio - The DVD was produced in Dolby Digital 5.1 with an option for English SDH subtitles.  The film is done in English with the occasional French subtitle without needing to activate an audio option.  The sound quality of the movie was fine, nothing spectacular.  The music often seemed out of place and didn't aid in the enjoyment of the film.

Extras - There are two extras on the disc: Deleted Scenes and Outtakes.  There are seventeen deleted scenes under that title, numbered as to where they would fall in the film.  And there are nine and a half minutes worth of outtakes, random flubs from the film. 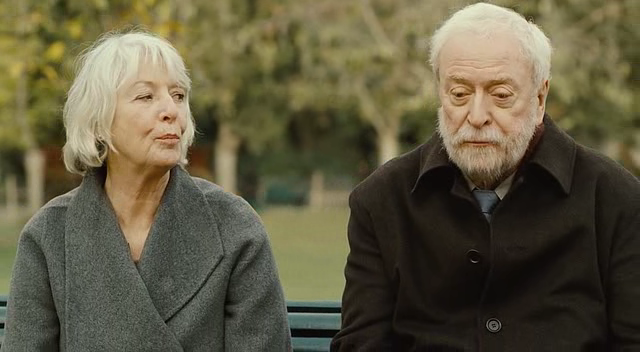 Skip It.  Last Love is a slow, heavy, difficult film, one that would have been a task to undertake even with the best acting and direction.  But those aspects weren't great, making a film that was both dark and not well-made.  Michael Caine was surprisingly bad; a weak performance and a poor character.  Nothing in the film leaps out as positive and I would be hard pressed to recommend it to anyone.  The video quality of the DVD was nice, the audio fine, and the extras few.  Not a film I would watch again nor one that I can give much praise.