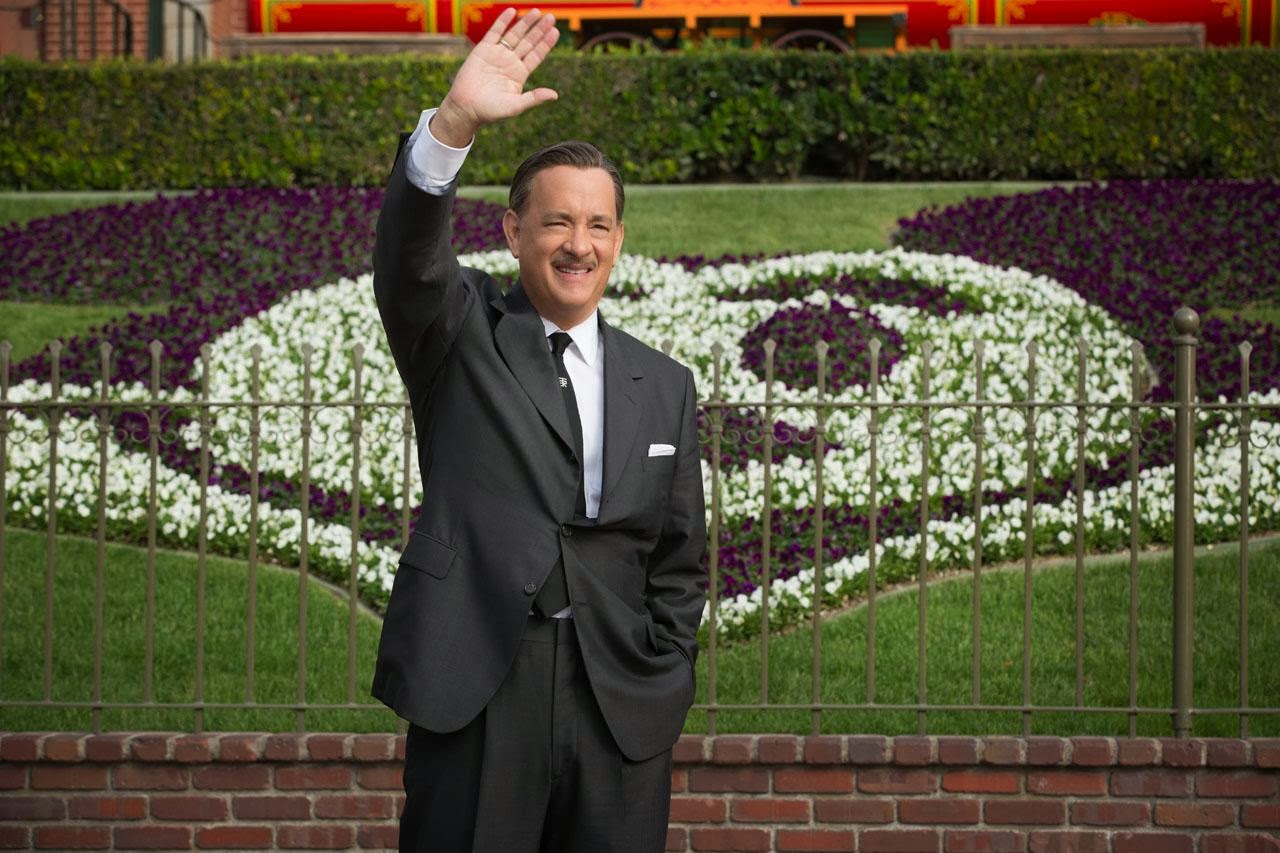 
If you've read my blog you know that I have kids and that I review some children's movies from time to time.  I'm not the biggest fan of animation, but I do enjoy a Pixar film now & then,  and I absolutely love the old Disney films.  One of my personal favorites is Mary Poppins, a five-star movie if ever there was one.  It possesses a magical quality and a depth that make it more than just a silly musical, elevating it to a place that not many films go, let alone feel-good family flicks.  And so when I first saw the trailer for Saving Mr. Banks I was extremely excited.  Here was the back story to a beloved classic, the truth behind how the movie came to be, what the author of the original book poured into her tale, and why it almost didn't happen.  I was prepared for a lot of cheese from this picture, and I was prepared to like it anyway, given the subject matter and the actors playing the major parts.  Well I was not disappointed.  The movie did end up being a little syrupy, but it also gave an accurate account of what really happened and revealed wonderful details of a film that I & so many others around the world already love.

This is the story of Mary Poppins, both the background of the character and the creation of the film.  She was crafted by a woman named P.L. Travers, the pseudonym of an Australian author whose books were quite popular among children but whose fame was slowly dwindling.  The famous Walt Disney had read her books and, more importantly, so had his daughters, prompting him to promise them that someday he would make a movie version of their favorite story.  For twenty years he hounded Mrs. Travers, attempting to gain the rights to her books, but she would never budge.  However, with bankruptcy looming, she finally agreed to fly to California, meet with Mr. Disney, discuss a possible script, and ultimately make a decision of whether or not she would sign over her precious Mary Poppins to this media giant.  From the start it was apparent that Travers was not inclined to sell, as she fought every decision, changed every detail, and generally said "no" to everything.  But as she & Disney begin to understand each other, the basis of her books begins to come clear and we see that Mary means more to Travers than just money.  She is a representation of so much; of the past, regret, family, loss, hope, sacrifice, and love.  And turning her into a floating, singing, smiling nanny is not going to be as easy as snapping your fingers. 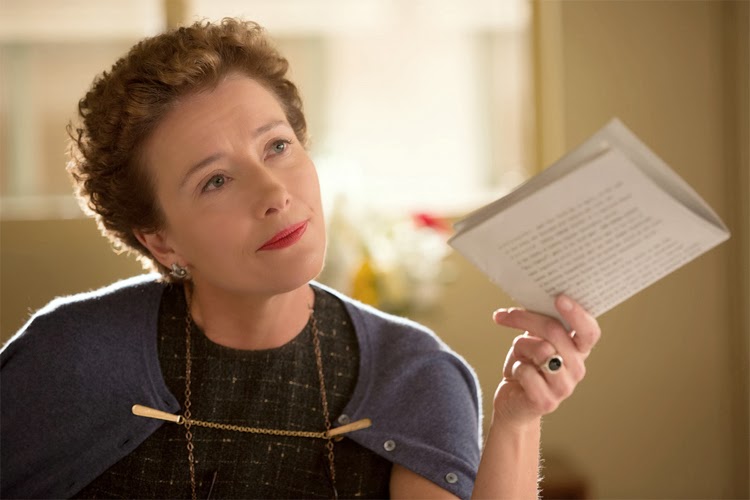 This is one of those movies that's not going to surprise you.  The trailer shows you what it's like and it's up to you to decided whether or not it's your style.  I mean, it's a Disney movie about a Disney movie.  I happen to like Disney movies, so I was sold.  It was heartwarming, pleasant, slightly sappy, made you feel a little sad, warmed you back up again, taught a lesson, the basics.  It was no more and no less than a good movie about Mary Poppins, just what you should have imagined.  Fans of the original film will enjoy the depth of the story, the detail behind the character, and the portrayal of the people involved in taking the books from the page to the screen.  There were many scenes straight from the 1964 film, many songs that we all know and love; it was a reminder of the greatness of Mary Poppins and a behind-the-scenes look all rolled into one.  The writing sessions, the brain-storming, the arguing over the script, the lyrics of the music; all the pieces are there to see, and to watch them be put together one by one to end up as a classic was very enjoyable, assuming you're a fan of the old film.

But as far as a modern movie goes, was it amazing?  No.  It was good, but not something that will stick with you, not something that will make you feel more than the shallow emotions that were being fed to you in the patented Disney way.  It's a great representation of something that actually happened and a great reminder of the story, but it's not too much more than that.  There is some fairly wonderful acting on display though, if you can forgive a little syrup.  Tom Hanks as Walt Disney was very strong; believable accent, charming demeanor, boyish joy, crafty businessman.  Emma Thompson was only slightly less solid as P.L. Travers; the closed off Brit, a lot of skeletons in the closet, emotion raging right under the smooth surface.  And even the side characters did a great job with what they were asked to do: Paul Giamatti, Jason Schwartzmann, B.J. Novak, Colin Farrell, Bradley Whitford.  No one stood out as bad, but no one really leaped across the screen at you either.  And that's how the whole movie felt; I enjoyed it because I enjoy Mary Poppins so much, but as a stand-alone film you can't call it excellent.  The flashback scenes were heavy-handed, the breakthroughs happened too easily, and the end was a little too happily-ever-after.  All in all, a film that can & should be enjoyed, especially by fans of the old books & movie.  But it's not an Oscar-winner, not a must-see, and to love it you would have to set your sights extremely low. 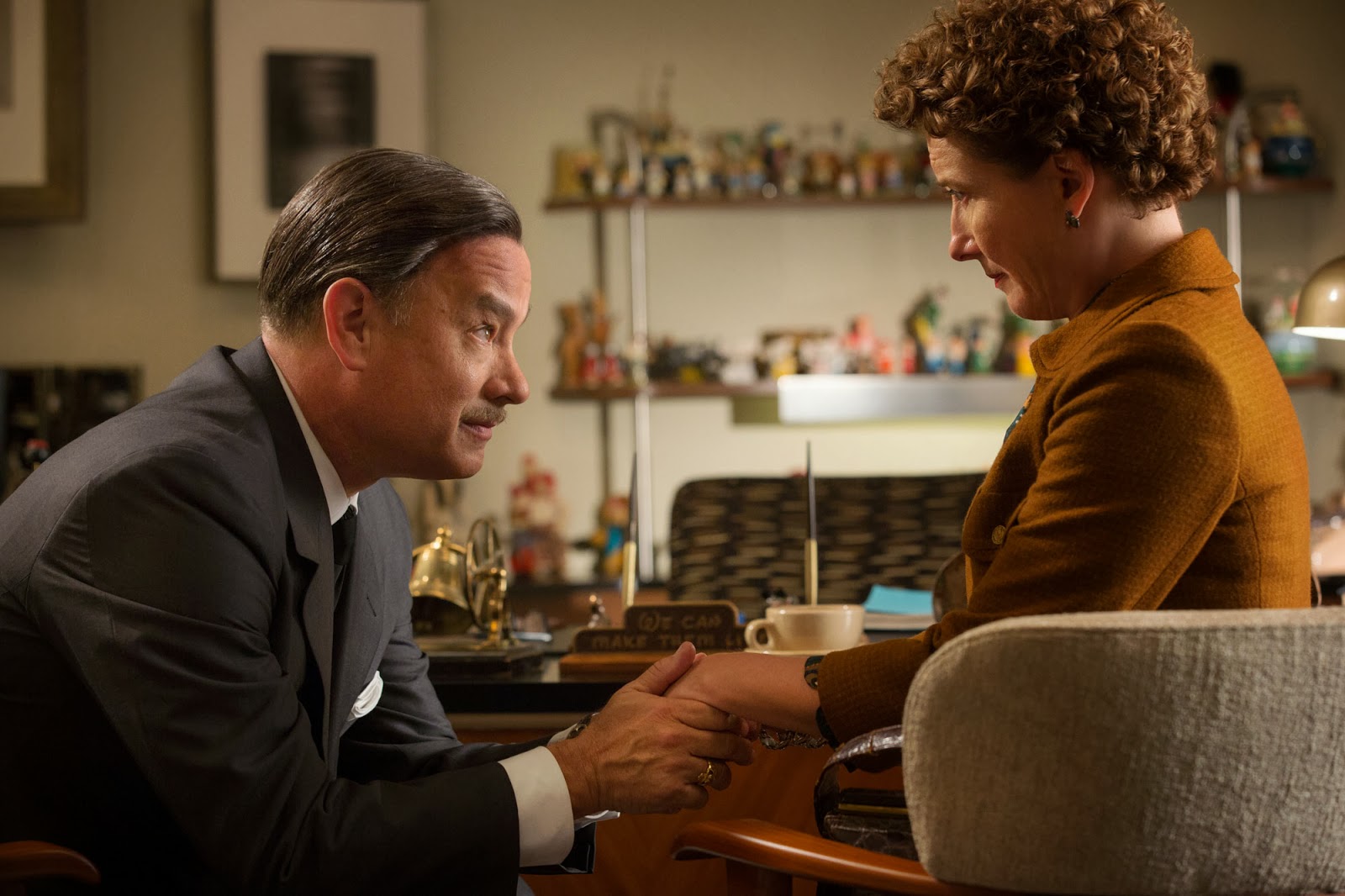