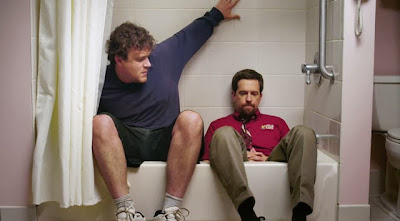 
I'm a fan of Mark & Jay Duplass, the fraternal directorial pair from New Orleans.  Their movies have a certain relaxed realism that I enjoy, with some offbeat humor & surprising drama mixed in.  The Puffy Chair, Baghead, Cyrus, and now Jeff, Who Lives at Home; all strong films with a unique take and a ton of funny moments.  And the great part about the Duplass Brothers is that they're just getting started.  They're young, hip in a very strange & nerdy way, and haven't peaked yet.  Mark has started doing a good bit of acting in both major & minor roles, but I would predict that this brotherly duo will make more movies, the best of which is yet to come.  In a roundabout way, that's a criticism of this film, as it's definitely not the best this team can do, not even the best they've done so far.  But it's still a solid film, a believable story of brothers, troubles, and the bonds that never break.

Jeff does indeed live at home.  He's a grown man who lives in his mother's basement, smokes pot, and contemplates on the mysteries of the universe.  His mother works in an office, his father has died, and his brother Pat doesn't really speak to him.  They're just too different; Jeff wanting to enjoy every moment & understand its meaning, Pat working hard to make money & to make his marriage last.  It's not going so well, as his wife Linda is on the verge of leaving him, and when one day Jeff happens to notice her getting into a car with another man, he & Pat go on a mission to unfold the truth.  In a journey filled with meaningful happenstance & personal discoveries, the brothers will reconnect while they travel the city, finding each other & themselves along the way.

With a plot that quickly becomes cheesy, Jeff, Who Lives at Home starts great & ends only good.  The beginning is hilarious, as are the odd conversations between the brothers.  Both Segel & Helms play their parts extremely well; they are at times funny, depressing, relatable, and real.  But what starts strongly quickly slows down and begins to feel a little boring.  Susan Sarandon as their mother is fine I guess, but her character is completely useless and only fills space with an awkward storyline.  She drags down the middle of the film, as does the increasingly dark undertone of the plot.  A little depth can be appreciated after the initial humor, but the film goes too far, abandoning what make it great at the beginning too soon, making the dramatic parts too important & too heavy.  It's a good movie that is at times funny & at times heartbreaking, but it's a bit too slow & laden to be wonderful.  I'm still waiting for the Duplass Brothers film that tops Cyrus, my favorite so far, and I think it's on its way, but this was just not quite it.