Movie Review - I Give It a Year 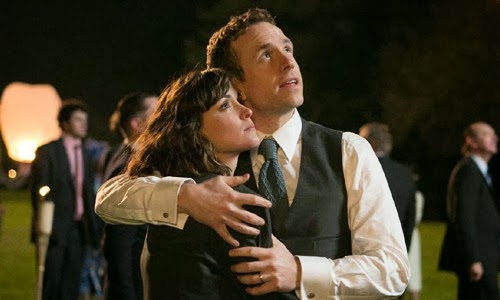 
Romantic comedies, we can all agree, are crap.  Now, don't argue, it's true and you know it.  We see the preview, the lead young man & the pretty young lady, they're in love but it's not working out, something goes wrong and their friends have to talk them through it.  We've seen it a thousand times and it's always bad.  And yet filmmakers keep creating them and we keep watching, knowing that they're completely unrealistic, worthless, and shallow.  I'm as guilty as you are, I make excuses to watch them too.  Some people go overboard, proclaiming My Best Friend's Wedding to be their all-time favorite, but even they have to know deep down that they're watching junk, that they've been tricked.  And I'll admit it, I let myself get drawn in too.  But my guilty pleasure is just a little more specific; British romantic comedies.  I don't know what it is, but I can't resist those accents and those wanker jokes, they get me every time.

In this take on the classic can't-get-it-right story, we are introduced to Josh & Nat.  They have only known each other for a few months, but get married anyway, assuming they'll continue to bond and fall in love as their marriage lengthens.  Turns out, that's not what happens, and it's not a surprise to their friends & family, who always guessed it wouldn't last.  But the unhappy couple are not willing to give up without a fight.  They turn to a relationship counselor for help and they try their best to fix their issues, but attractions on the side begin to get in the way.  Josh is best friends with his ex-girlfriend Chloe, a sweet & kind woman who is still in love with him.  And Nat begins to fall for a client, a dashing American businessman who is everything she ever dreamed of.  Will the pair stay together & make it work or will they give into their temptations and abandon their partnership?

See, it sounds typical, like it's been done before, and of course it has.  But that didn't stop me from liking it.  It's those damned Englishman!  They're just so funny!  At least to me anyway, that's my weakness.  I can't help laughing at their stupid jokes, dry humor, and vulgar vagina talk, it just gets me every time.  But I don't think I'm alone or I wouldn't recommend this movie to anybody else.  It might not be as touching as Love Actually, but it's not as fluffy as Notting Hill either.  It's somewhere in between, a hilarious yet typical romantic comedy that has something special to offer if you give it a chance.  I think it's the awkward moments, the insulting remarks, and of course the penis humor.  It all adds up to a strong British rom/com, one that I liked despite it's overdone storyline, and one that might strike your fancy too if you gave it a shot.