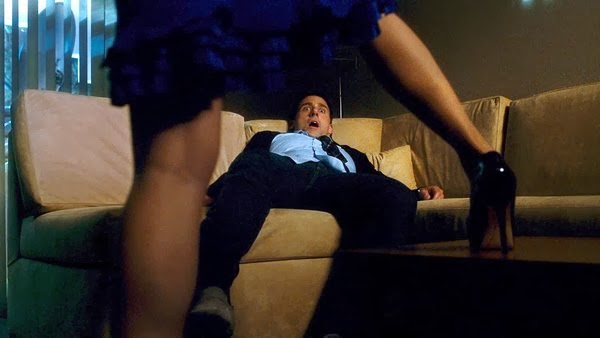 
The romantic comedy is the butt of most cinematic jokes, and deservedly so.  So many are done so poorly that they've created a genre of flops, a group of films that are predictably awful and unashamedly cheap.  And the stories are always the same; love comes from an unexpected place, it's awkward & hilarious, it doesn't look like it's going to work out, but then of course it does.  You wouldn't think Hollywood could make a millions versions of the same plot, but they have and they will because for some reason people keep eating it.  Maybe it's the pretty people, maybe it's the fantasy of love against all odds, or maybe it's just a simple way to waste some time without having to waste much energy.  But every once in a great while a rom/com slips through the sludge and delivers something a bit more than crap.  Not a lot more, but enough to get excited about, since it's exponentially better than the rest of its genre.  Crazy, Stupid, Love is one of those films, a better-than-average silly love song that may not be amazing, but boy is it better by comparison.

Cal Weaver is a man at a crossroads.  His life is changing before his eyes and he's not sure what to do next.  His wife Emily announces that she's had an affair and wants a divorce, forcing Cal to move out and reconsider what he viewed as a solid life with his high school sweetheart.  Meeting Jacob Palmer should help straighten things out, as Jacob is the town's leading ladies' man, going home with a different beautiful woman every night.  He teaches Cal his tricks, sprucing up his look and helping him to develop some confidence.  But things just get more complicated, not less.  Cal has a one-night-stand with someone who he will unwittingly see again, his kids' babysitter is in love with him, his son is in love with the babysitter, his wife might want him back, and his new wing man might have accidentally fallen head over heels for someone who will turn out to be a very awkward choice.  Love is crazy and no one knows how to control it, at least not in this family.

It's not an incredibly original story; man wants woman, keeps making mistakes, woman wants man, can't express herself, player falls in love with uptight girl, gives up playing, uptight girl is not who he thought she was.  It's convoluted, a little overdone, and I wouldn't stack it up against films that are obviously superior in every way, but that doesn't mean that it doesn't work.  It's just better than most romantic comedies.  It's actually pretty funny for one thing, and for another it's actually a little romantic.  Shocker I know, but this rom/com surprisingly is one.  And it's gotta be the cast.  Julianne Moore and Emma Stone I could do without; neither is a great actress and neither is particularly believable.  But Steve Carell and Ryan Gosling are great bordering on excellent.  They sell the cheap story, hook you when you know you should resist, draw you into characters that, played by different actors, would be absolutely terrible.  Their talent made the movie, eliciting the laughs and the tears, and ultimately delivering not a wonderful film perhaps, but at the very least one that is the cream of its crappy crop.