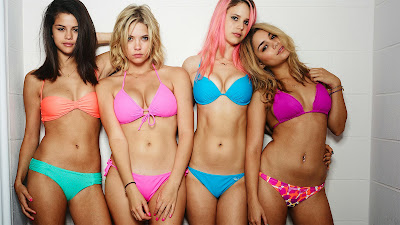 
So I had gone to the theatre with some friends to see Saving Mr. Banks.  Not the manliest of movie choices for a guys'-day-out perhaps, but that doesn't bother us.  Well we forgot to factor two things into our plans: that it was $5 Tuesday and that it was New Year's Eve.  The movie was sold out as were all the other ones we were interested in/hadn't already seen.  So in the end we decided to just watch a movie on demand back home, something that looked interesting.  I had been curious about Spring Breakers; I heard it was a polarized film and that it might be either the best or worst movie of the entire year, depending on your vantage point.  Well turns out there's a reason why curiosity killed the cat, and it also turns out that not only was this movie the worst I'd seen all year but perhaps the worst I had seen in my entire life.

Girls just wanna have fun, right?  That's the case for these four BFFs: Candy, Brit, Faith, & Cotty.  All they want is a break from school, a chance to really let loose, and by "let loose" they mean do a lot of drugs & drinking.  But the problem is they don't have the money for the trip down to Florida on the party bus.  Solution; robbery.  The wilder three of the four quickly hold up a local restaurant, wearing masks, in & out, burn the car, pretty clean & smart.  Now they have the cash for their adventure, and all begins tremendously well.  Until, that is, a party they're attending gets busted, they get picked up for drugs, slapped with a fine that they can't pay, and tossed into jail.  But an unknown guardian angel is looking out for them in the form of a wild rapper named Alien.  He bails them out, takes them under his wing, and introduces them to a life of crime that only some of them can handle.  The girls are in high water down in the Sunshine State and may not get out alive.

This is Bottom Five, one of the most terrible things I've ever voluntarily sat in front of for ninety minutes.  I can't believe that at some point I added this to my Watchlist, that I turned it on thinking I might see a good film.  It was so incredibly bad that it's almost unbelievable and it's definitely hard to explain.  From the first five minutes you can tell there's trouble; wooden dialogue, odd repetition of conversations, incessant & awful background music, trippy drug scenes.  And then it just gets worst.  Party-goers with their boobs out, keg stands, drunken blubbering, dramatic sunsets.  And THEN James Franco pops in.  He's got the dreadlocks, the platinum teeth, the room full of guns ("Look at my shit!").  But at least he seemed somewhat ironical or farcical or something.  The rest of the movie was utter and complete garbage.  It had no point, no plot, no emotion, no story, no hook, no depth, no characters, no believability.  There was just nothing good happening whatsoever, and I spent the majority of the time forcing myself to watch something that I knew was just going to get worse.  Learn from my mistake and stay away from Spring Breakers; don't let curiosity get you.