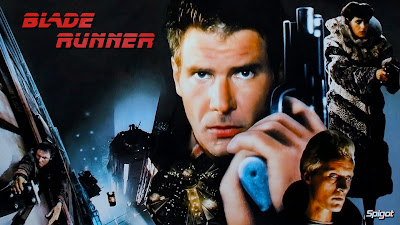 
I've always heard good things about Blade Runner, one of the pioneers of modern sci-fi.  It's a classic film that's a must-see for fans of the genre, or so the story goes.  And I had reason to be excited about it apart from its popular pedigree.  It's a Ridley Scott movie, and that usually equals good.  Alien, Legend, Thelma & Louise, G.I. Jane, Gladiator, Black Hawk Down, Kingdom of Heaven, Prometheus; all hit movies with dark plots and fascinating stories.  He's had his fair share of clunkers; Black Rain, Hannibal, Robin Hood.  But usually you can expect a strong effort from Scott.  And you can't deny the prowess of Harrison Ford either.  At the time he was everyone's hero, Han Solo & Indiana Jones, and since then he hasn't slacked off much.  So I was prepared for one of the better sci-fi movies I would ever see, and you can't blame me.  What I got was something much stranger.

A blade runner is part cop, part bounty hunter.  In the future there are genetically engineered "humans" called Replicants that are outlawed on Earth.  They staged a revolt out in space and have subsequently been banned from our planet.  Blade runners are tasked with hunting down any who try to come home and killing them immediately.  Enter retired runner Deckard who has just been commanded to track four Replicants who have entered an American city and eliminate them.  Not an easy task, since these Replicants seem to know what they're about.  They are on a quest to find their maker, the powerful Dr. Tyrell who funded their creation.  Deckard must stop them before they succeed, solving the mystery of their mission along the way.

This movie was not what I expected at all, which can be a very good thing, but in this case I think it was a bad.  It was less like Alien and more like Time Bandits, which was done the year before.  Now, I love Time Bandits, but because it's so incredibly off the wall & weird, not really because it's dark, confusing, and often dripping wet.  Come to think of it, those words could be used to describe Alien as well so maybe I shouldn't have been surprised.  But Blade Runner just wasn't as cool & fascinating as I wanted it to be.  It was dreary & odd, a mix of too many movies and a mess of effects.  Floating cars, eye balls in jars, fake animals, odd unicorn dream sequences, extremely powerful handguns, superhuman clones, a city of constant rain & darkness; it was just a lot to take in.  I'm sure my own expectation are to blame for the disappointment that I feel, and it wasn't all bad; it was an original plot, there was some wild action, the characters were well developed.  I just didn't get what I wanted and so was left a little bitter.  If you haven't seen it I'd advise you to give it a shot, but to not go in expecting the best sci-fi you've ever seen.  Blade Runner is an interesting & perhaps groundbreaking film, but it's not the masterpiece that you might expect.