When I think of Peter Berg it's not as a director, it's as an actor.  And I guess that's a good thing, considering the movies he's directed.  Very Bad Things, The Rundown, The Kingdom, Hancock, Battleship; a mix of strange comedy and dumb action that may have made a few studios a few bucks but won't ever be confused with quality films.  Come to think of it, his acting credits aren't that impressive either; a lot of small, self-cast roles and the one that I remember him best for, Paulie in Corky Romano.  Now, all that being said, Lone Survivor is his newest and by far best project yet, so his past work can be put behind him.  But when you make a habit out of being typical it's bound to creep up into even your more serious work, and that's what happened here.  He directed a great film about an extremely stirring true story, but his weaknesses made themselves known and the movie fell short of what could have been a Best Picture contender.

Based on the  book by Marcus Luttrell, Lone Survivor is the real-life tale of a military mission gone horribly wrong and those whose lives were tragically lost.  Set in Afghanistan in 2005, the story follows a team of US Navy SEALs as they begin a dangerous mission; insert themselves near a Taliban encampment, identify the infamous Ahmad Shah, and eliminate him.  The plan is strong, support is in place, and all is going smoothly, until one unexpected event leads to the compromising of the mission.  With their presence now known by the enemy and communications to their base impossible, the four men of the team are completely alone: Michael Murphy, Marcus Luttrell, Matt Axelson, and Danny Dietz.  In order to survive they must fight as one person, working together to stay alive despite insurmountable odds and an unforgiving landscape.  This band of brothers will battle to the end, never giving up, and always believing in each other. 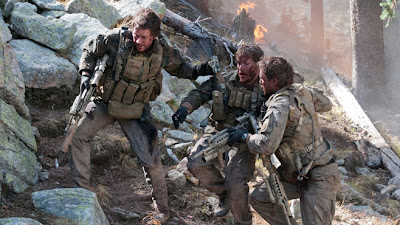 It's been a while since I saw a film that was this intense, this unrelentingly in-your-face and action-packed.  And the great part about the action was that it wasn't pointless.  I don't typically like action movies because the fighting, the bullets, the explosions, they're just fluff.  Take them away and you have nothing left.  But that wasn't the case in Lone Survivor.  The action was frighteningly real, totally necessary to the story, and simply not stupid.  And strip the fights from the film and you're still left with interesting characters that were both well-acted and representational of real-life soldiers.  The SEALs in the movie were painted as life-like as possible, allowing us to see the men behind the bravado and to really connect with their back stories.  When they were thrust into non-stop action the plot wasn't stripped away, it was actually strengthened, buoyed by strong actors in solid roles, making the entire film that much more believable.

The weak part of the movie was director Peter Berg.  He did a few things right that helped me to be immersed in the story and I give him credit for that.  The way we could hear the breathing of the soldiers as they hiked, the way the sun glared in our own eyes, the simple use of military jargon; these all aided in making me feel connected, creating the illusion that I was right there in the firefights.  But his mistakes really took away from the greatness of the story & acting.  The cheesy moments thrown in, the explosion where everyone jumps as one in slow motion, the little kid helping out the dirty American, the goodbye speech complete with "If I don't make it, tell my wife...."  Those moments just weren't necessary.  Perhaps they were in the book, perhaps they happened.  But by making a realistic war movie and then throwing in standard Hollywood lines, Berg created a picture that was a little muddled, half grit & half sap.  Let the actors push those emotions across without words; they are talented enough to do it.  Walhberg, Foster, Hirsch, and the lesser known Kitsch; they all did a tremendous job and played the part of four blood brothers awesomely well.  But the movie fell short of perfection and I believe the blame is Berg's.  This story with these actors should have been a home run no doubt about it, but it fell just short, which should be reflected at the Oscars. 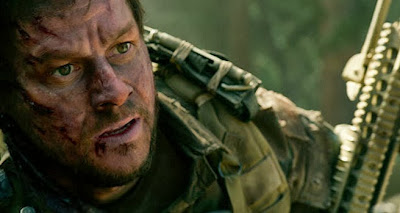