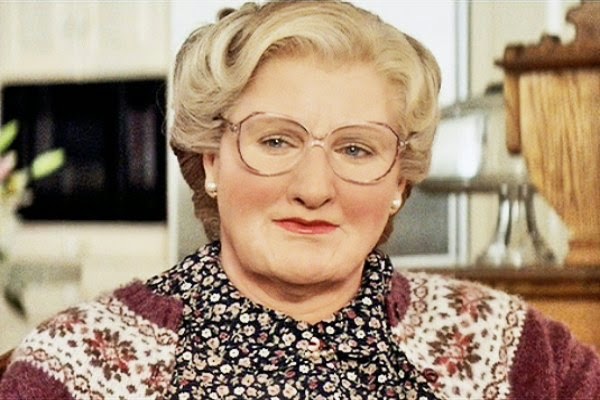 Last night Robin Williams was found dead at his home after an apparent suicide.  The news shocked the country, as Robin has always been one of America's favorite funny men, an actor who won over our hearts too many times to count.  His battles with depression and addiction are well-documented and, sadly, his demons caught up to him at last.  The cinematic world owes a lot to Robin Williams, for his unorthodox comedy, his larger-than-life personality, his incredible imagination, his transfixing voice, and his wonderful talent.  After I heard the news, I watched Mrs. Doubtfire in his honor, though I could have picked a dozen other phenomenal films that he was a part of.  Good Morning Vietnam, Dead Poets Society, Awakenings, The Fisher King, Hook, FernGully, Aladdin, Jumanji, Good Will Hunting, Patch Adams, One Hour Photo, Death to Smoochy; just a few of the movies that made his career, that solidified him in our minds as one of the greats, that will always stay with us even now that he's gone.

In Mrs. Doubtfire, Robin Williams famously plays an old English lady who likes to vacuum to Aerosmith.  But the story starts more simply than that.  Daniel Hillard is an actor and a dreamer, a loving father and a messy husband, a free spirit and a child at heart.  But his comedy has worn thin with his wife Miranda, whose structured life & job keep her away from the home too much, returning only to find Daniel acting completely irresponsibly.  So she files for a divorce, a move that was years coming.  Because he can't hold a job, Daniel isn't allowed to spend much time with his children, a ruling that doesn't sit well with him.  So, answering an advertisement that Miranda placed for a nanny, Daniel becomes Mrs. Doubtfire, a British housekeeper who cooks, cleans, and gets to spend everyday with the kids that he/she loves.  But the charade can't last forever, and Daniel must get his actual life in order if there is to be any hope that the family will be united once again.

Robin Williams has proved that he can be wonderful in either funny or serious roles.  We knew him originally as Mork from Ork and his comedy is legendary.  But when he sets his talent to it, he can blow us away with his dramatic work.  His genius is in blending the two.  In Dead Poets he's hilarious and moving.  In Patch Adams he's goofy and heart-breaking.  And in Mrs. Doubtfire he works the same magic.  His voices & his jokes are amusing throughout, but it's the serious moments that ultimately win us over, that show us that life can be both funny & terribly sad.  We loved him because he was showing us his true self in his characters, both the light & dark sides, and perhaps no role allowed that to shine more than Euphegenia Doubtfire.  The rest of the film fades into the background, perhaps more so watching it now, and Robin is definitely the key to making the movie enjoyable.  He's the star, two times over, and he brings the story to life.  This will always be one of my favorite comedies and I will always remember Robin Williams fondly.