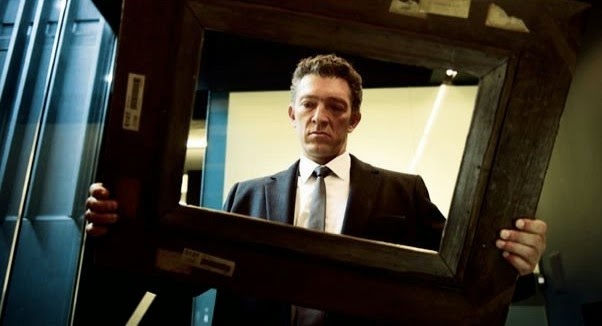 
Danny Boyle has made a major name for himself over the last twenty years.  He started out very English & always casting Ewan McGregor (Trainspotting, A Life Less Ordinary), went a little wild & violent (The Beach, 28 Days Later...), and then turned dramatic (Millions, Slumdog Millionaire, 127 Hours).  He's solidified himself as a strong director, always turning out quality, always attracting great actors, and Trance is no different.  It's labelled as a crime/mystery/thriller, but one with a psychedelic edge.  It boasts three excellent actors, but no Hollywood superheroes.  It's an intriguing movie all around, a story that caught my attention with visuals that were sure to please.  It's hard to say now whether I feel disappointed that this film wasn't amazing or pleased that it was a solid piece of entertainment, because once again Boyle delivered, it just wasn't perfection.

It's a classic setup; crime gone wrong leads to awkward conversations with dangerous people.  Simon was just an employee at an auction house until his gambling problems got out of control.  Then he became an employee at an auction house who could easily get his hands on priceless art.  But he needed some help, he was no criminal, and that's where Franck came in.  Franck and his gang of thugs knew what to do, how to run the heist, how to utilize Simon, and the robbery went smoothly.  That is, up until the painting went missing somewhere between the gallery and the hideout.  Now Simon, who can't remember whether or not he stole the painting because of a blow to the head, is in hot water.  Only a hypnotherapist can help jog his memory, but that means trusting one more person in a circle of very untrustworthy characters.  Will they find the painting, or will Simon's faulty memory be the downfall of them all?

My only problem with this plot is that it relied to heavily on my suspension of disbelief.  I was on board at the beginning, curious as to where all the clues were leading, and than hard pressed to accept the bogus tales that kept popping up to explain how all this chaos came to be.  It was just a little too much to swallow; a simpler plot would have sufficed and still kept my attention.  Or maybe it was that too much was revealed all at once near the end, with hardly any clues along the way to prepare the audience for the last act.  I'm not one of those people who are always trying to figure it out before the director tells us, but I would have liked to have had some guidance before everything was turned on its head.  The actors could have helped me out a bit, but their performances were a little muddled.  Not that I blame them, so was the plot, but I expected a bit more.  McAvoy was fine, Cassel was one note, and Dawson was terribly robotic.  I wanted an exciting caper or a trippy mind-blow; what I got was a tiny bit of both wrapped up in an unbelievable storyline.  Boyle is a good director and he didn't fail here; he just didn't nail it, didn't edit enough, and missed a nice opportunity.