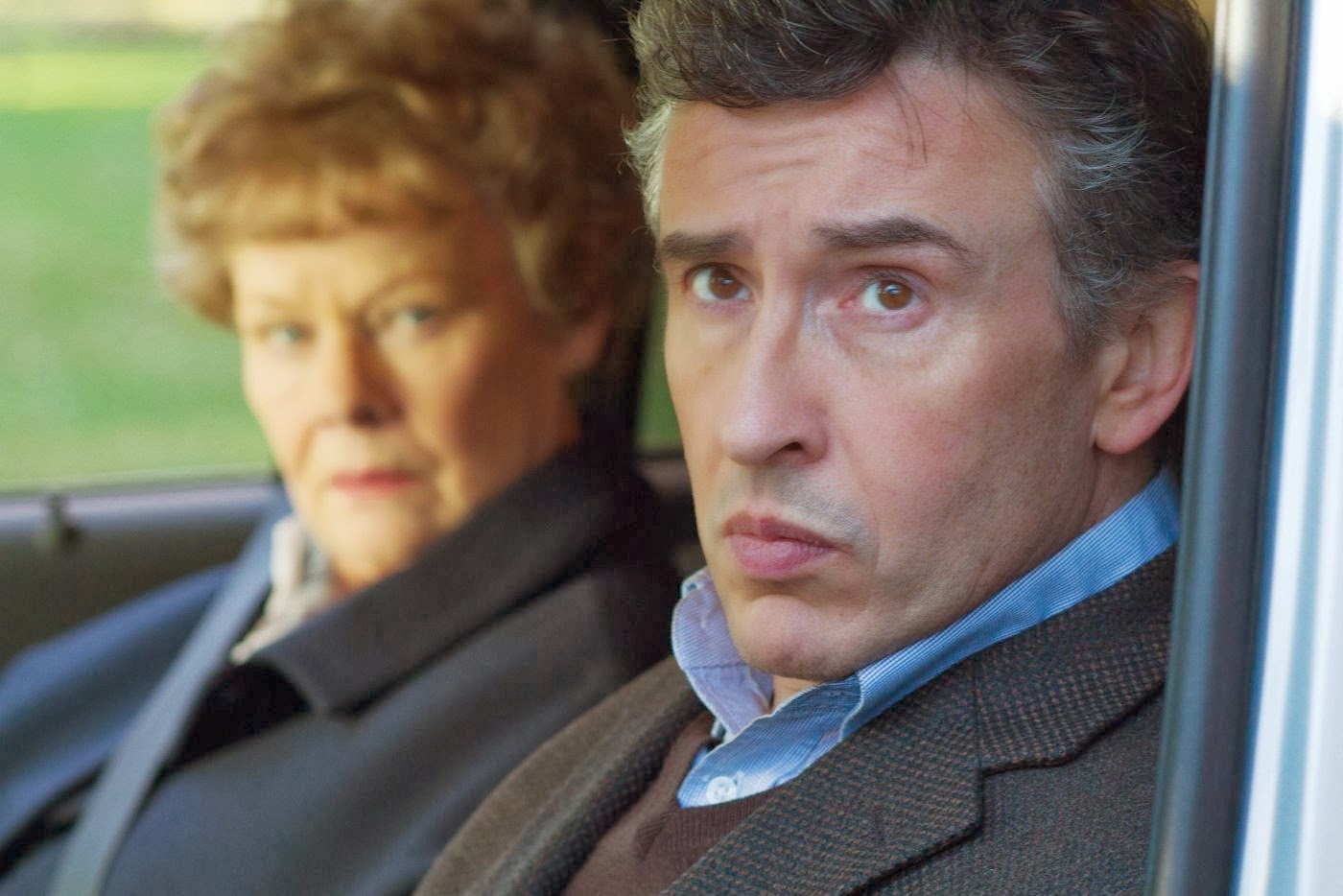 Philomena was the only Oscar contender that I missed last year.  And not because I thought it would be bad, quite the opposite.  Check out the trailer here; it looked very good, a mix of British comedy & biography.  I just didn't have the chance to see it in the theatre and I finally got to remedy that.  In that span of time, I learned to love Steve Coogan as Alan Partridge and Judi Dench as M, both very different roles from what is promised in this film.  I guess I was a little worried that they as actors wouldn't mesh in this film, that the movie would end up a bit messy.  But I was still excited to see it, had heard great things about it, and needn't have worried.  Philomena turned out to be Oscar-worthy, with solid directing, acting, and a story that begs to told.

The title character is an elderly Irish lady of simple means.  She's a devout Catholic, a lover of romantic fiction, and the mother of a son she hasn't seen in almost fifty years.  As a young girl, Philomena was forced into service at an abbey when she became pregnant, forced to work off her debt to the nuns, and forced to give up her child to American parents that were willing to pay a small fortune.  She has kept her past a secret all these years, infrequently attempting to gather information about her boy from the secretive nuns.  But not until she reveals the entire truth to her family and teams up with jaded journalist Martin does she start seeing any progress.  Together, Philomena & Martin travel to the U.S. in search of the child that was taken, developing a trust and a relationship along the way despite their vast differences.  And as the story unfolds, the drama heightens, leading to an amazing story for Martin but an incredibly difficult journey for Philomena.

This is a true story, based on Martin Sixsmith's article about this amazing tale, and it's very powerful.  The simple fact that this happened, that children were taken from their mothers, that women were made to feel like filth for their "immorality", that it was all done in the name of religion; it's hard to swallow and hard to look past the anger that immediately comes to the surface.  That's what Steve Coogan's character is there to do, to show us anger in the face of injustice, and he does a perfect job.  I've never seen him better, pairing the dramatic with a hint of the funny, maintaining realism in the face of unreal events.  And, of course, Judi Dench was excellent.  She was nominated for an Oscar for her role, which was well deserved, and I can't think of someone who could have pulled it off better.  It was a terribly upsetting story, made believable by two talented actors, ultimately becoming a must-see movie that makes an immediate impact and won't fade from your memory.