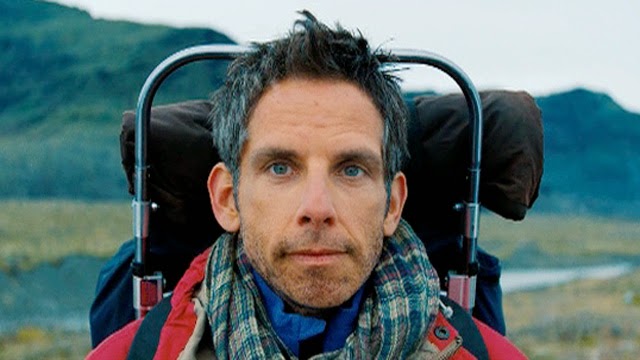 
This is one of those unfortunate films that got a bit of Oscar buzz but never built enough steam to be a contender.  Ben Stiller stars and directs, marking the 4th time that he's done so (Reality Bites, Zoolander, Tropic Thunder).  You can see, especially based on the latter two, that this film would be an extending away from the comfort of comedy that Stiller has grown to rely on.  I've always seen him as a good actor, not just a funny guy, but many can only take him seriously when he's being ridiculous.  He takes a stab at deeper meaning with Walter Mitty, a film based on a short story and fleshed out here to be a look into the dream world that the average person can never turn into reality.  As far as quality cinema, Stiller nails it.  As far as award-winner, he came up just short.

Walter is your average lonely guy.  He goes to work every day, balances his checkbook religiously, dabbles in online dating, but never veers from the typical path of his day.  He works for Life magazine, which could be something that leads to adventure.  And perhaps the old Walter, the young kid with a Mohawk who liked to skateboard, would have taken advantage of such possibilities.  But our Walter just processes pictures, shots of the exciting world that's all around him.  When one very important photo gets misplaced, Walter must leave his comfort zone in order to do his job, something that takes all the courage he can muster.  But there's life waiting for him, adventure, drama, and happiness, if he can only be brave enough to seek it.

You'd better like Ben Stiller if you're to have a chance at liking Walter Mitty.  It's a character movie for sure, with only one real main character.  We travel with Walter, we understand his life, we jump int action with him, we shrink with fear.  Stiller plays the part perfectly, but it's a lot of in-his-face action, so you'd better be willing to stare at the guy for two hours straight.  But if you can do that, you're in for an entertaining and though-provoking time.  It's a fun story, one that forces us to travel, to think about our own lives, and uses a bit of fantasy to make a bigger statement.  The themes are there to examine, the idea of a life worth living, about taking chances, and making the small amount of time we have on Earth count.  So it's a film you can think and/or talk about after, a movie that has a message.  Is it amazing?  No.  Is it incredibly original?  Not really.  But it's beautiful to watch, with a clever beginning and a stirring end.  It's a film worth seeing, one the won't blow you away but will make you feel, and that's something.