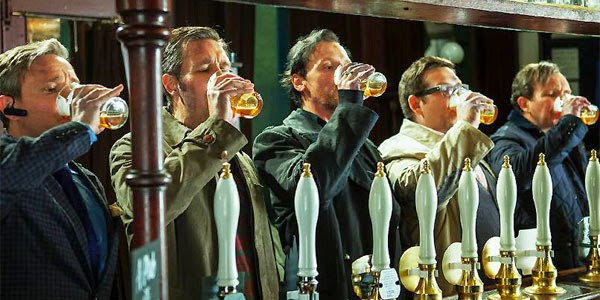 
Why are the British funnier than other humans?  And why does their incessant beer-drinking not seem trashy and unhealthy?  If a Brit didn't say something humorous while downing a pint I'd be concerned.  And it's this standard comedic setup that we've all come to expect from Simon Pegg & the boys.  He & director Edgar Wright wrote the scripts for Shaun of the Dead, Hot Fuzz, and now The World's End, Pegg of course starring as well.  Add in Nick Frost, another of the team, and you've got irreverent English comedy that you can predict from start to finish.  I don't think that's a bad thing actually, I don't mind having some knowledge and comfort when the plot starts off, letting me sit back and enjoy the style of humor I've come to expect.  The gang delivers here once again, pulling off another insane romp that makes little sense but is wildly amusing.

A group of five buddies from a small town in England have some unfinished business.  Twenty years ago they began a famous pub crawl, drinking 12 pints at 12 bars.  Only, they never finished it.  To Gary King, it was the best night of his life, but also an incredible failure that he's always wanted to remedy.  So he gets the boys back together, dragging them away from their boring adult careers, and convinces them to return home for one more chance at completing the fabled Golden Mile.  There is, however, one small problem.  Their old stomping grounds have gone through some changes recently, specifically the taking over of bodies by a robotic alien force.  Say what?!  It's a bit of a shocker, but Gary is not about to let these blue-blooded weirdos stop him from completing his goal, and he will drink his final pint at The World's End if it kills him.

Ridiculous doesn't begin to explain it.  The movie starts out regularly enough, very British, very fast paced, very funny, all what you would expect.  And then things get strange.  The alien element turns the plot into an action movie, humans vs robots, with chopped off limbs galore.  It's an odd transition, but the humor continues throughout and they try to weave the putting-the-past-behind-you story with the sci-fi plot in a way that's not too out there.  I enjoyed the first half of the film more than the second, but at least that first half got me invested enough in the characters to want to know what would happen to them later on.  I doubt the style of comedy is for everyone, but if you enjoy this team's other movies I'm sure this one will do it for you too.  I'd recommend you stay away if you don't love heads being ripped off, sex-with-your-sister jokes, and Brits getting hammered.  Otherwise, go for it.