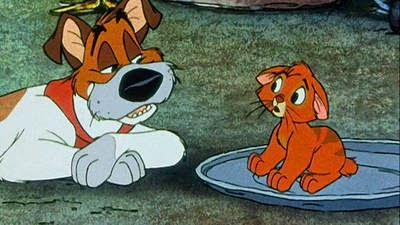 
I remember the McDonald's toys of my childhood as being the only connection I ever had to Oliver & Company.  I never watched the movie as a kid, never grew to love the music, and so didn't pass it on to my children like I've done with so many other Disney classics.  I wouldn't even know that much about the story if it weren't for the Dickens novel that it's loosely based on.  And come to think of it, I'm not sure I've ever actually read the whole thing.  I was "exposed" to it at some point, but my knowledge of the plot & characters comes from the the musical and the 1968 adaptation thereof.  That's how I want my Oliver shown; fabulously.  And wow is that not the way it's shown here.

Poor Oliver the cat, all alone in the Big Apple, not a friend in the world, starving and bedraggled.  That is, until he meets Dodger, the crafty dog who's both street smart and one smooth cookie.  The dog & cat become buddies and Dodger takes Oliver under his wing.  Well, the little kitty follows him home, but it amounts to the same thing.  Soon, Oliver is part of the gang, a member of a pack of thieves who are trying to help out their human Fagin, who's in a mess of money trouble.  One day, while on the job, Oliver meets Jenny, a little rich girl who's all alone.  They go home together to start a happy life, but the gang "rescues" Oliver, and when Fagin realizes there's money to be had for ransoming the cat, he just can't help himself.  Oliver wants to be Dodger's friend, but he also wants Jenny's love, poor mixed up cat, and he's definitely in way over his head.

So, as far as the original story is concerned, you've got Oliver, Dodger, & Fagin, but that's about as far as the connection goes.  It's not really an animal's take of Dickens, more's the pity, but rather an animated movie that uses the story as slight inspiration.  Not exactly what I wanted, but alright, I can deal as long as the movie is cool.  But it wasn't.  First off, it's extremely boring.  Things happen, sure, but it's so shallow that you can't possibly invest yourself into the story or characters, leaving every event feeling empty.  Secondly, the voices were badly done.  Joey Lawrence as Oliver was fine, throwaway, but Billy Joel as Dodger was pretty bad.  Toss in Bette Midler as a poodle and you've got one hot mess.  The music and the artwork were a homage to New York City, which I appreciated, but that's about the only thing I did.  The songs themselves were forgettable, the characters were underdeveloped, the plot was dumb, and I, at many points, almost fell asleep.  Keep to collecting the old Happy Meal toys, but stay away from actually watching the movie.