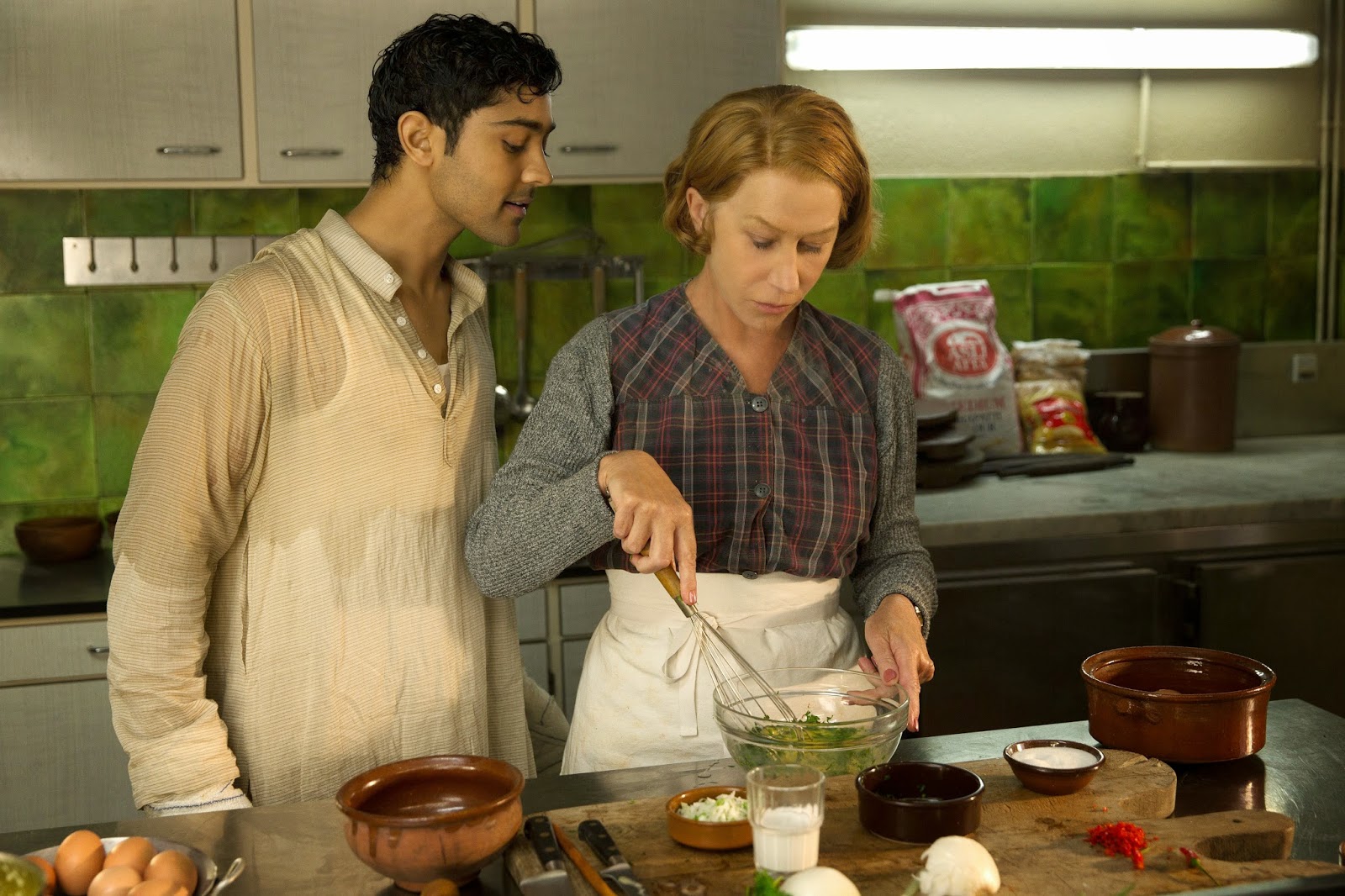 
When Oprah produces a movie, I worry.  I'm just not the target audience for her show, her book club, or her taste.  Maybe that's because I'm not a 40-year-old mother of three from Missouri, or maybe that's because I don't like cheese.  Whatever the reason, I hear Oprah and I assume I won't like the content.  Now Stephen Spielberg I like.  He also produced the film, teaming up with Oprah to push this book-turned-screenplay.  So we have a draw; better look to the director.  Lasse Hallstrom has been directing over-dramatic movies since the 90s.  Once Around, What's Eating Gilbert Grape, The Cider House Rules, Chocolat, The Shipping News, Salmon Fishing in Yemen, Safe Haven; it's a mix of romance and sob stories that always get screen time but don't always deliver.  I knew I was taking a chance watching The Hundred-Foot Journey, a film that had red flags and actually didn't look that great.  Well it wasn't, and my lack of faith in Oprah has been renewed.

The Kadam family is on the move, looking for a spot to restart their lives after their matriarch and their restaurant both died in the flames of war in India.  Traveling through France, they are forced to stop at a small village when their van breaks down.  But as they say later, perhaps brakes break for a reason.  The perfect spot for their family restaurant is waiting for them and Hassan, the son & chef, is ready to cook the traditional food of his homeland.  There's only one small problem; the Michelin star restaurant across the street.  Madame Mallory, the owner, doesn't like competition moving in next door, and she also doesn't like the Kadam family, with their loud music and their boisterous cuisine.  A mini-war begins between the two locales, complicated further by Hassan's interest in French techniques.  He will have to choose between staying loyal to his family and going down his own path, a road that might take him far away. 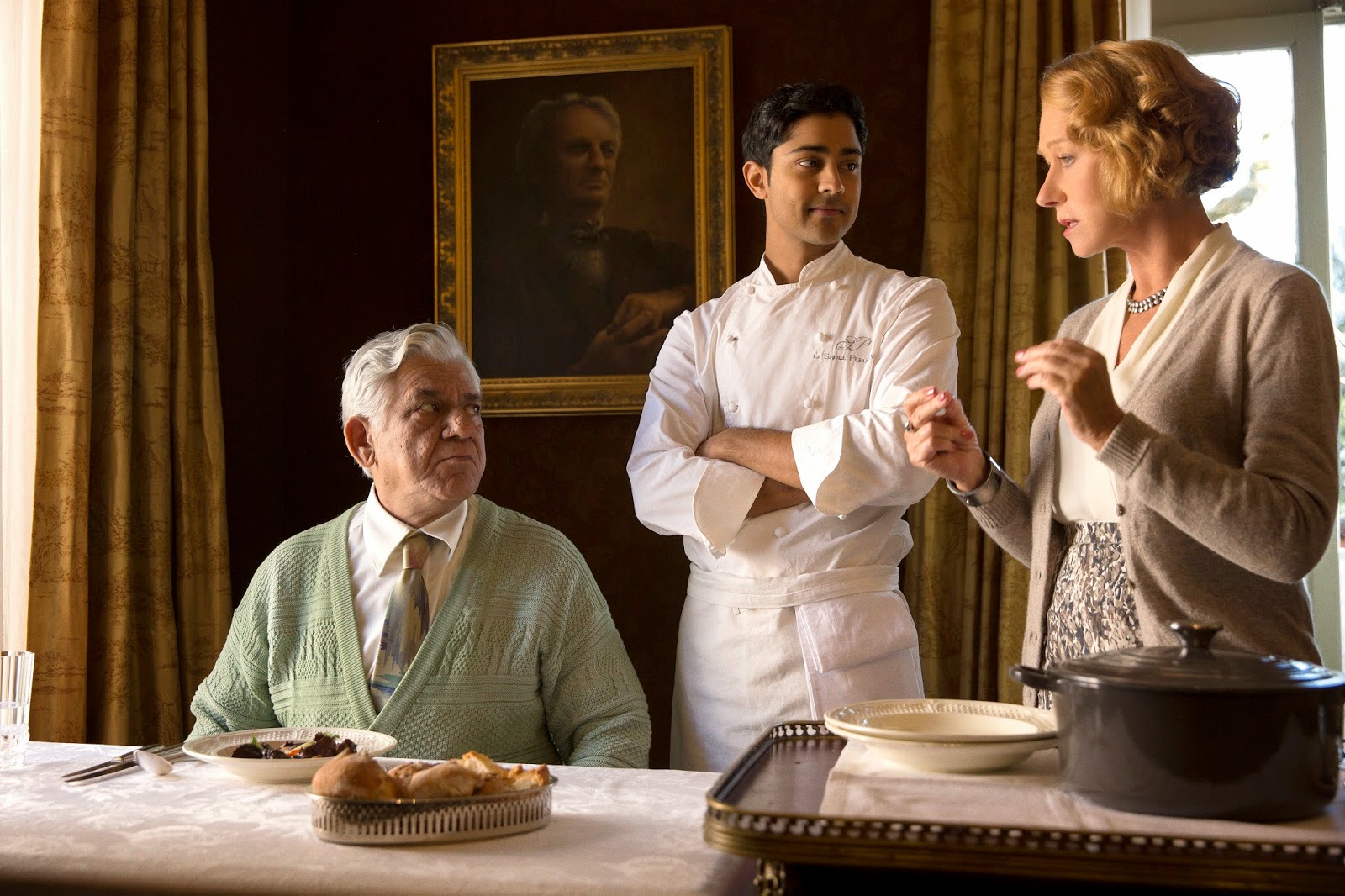 It's not that it was cheesy, it's that it was so cheesy I wanted to spread it on a baguette and eat it.  That's one positive thing that can be said about the film; it made me hungry.  A little like Chef in that way, it was a movie that obviously appreciated food, how it brings people together, how it reminds you of home, how it can come from the soul.  That theme was real and came across clearly; much better than the others.  There was a family element that just annoyed me rather than captured my heart.  They were close, yes, the father didn't want to let the son go, I get it.  But more depth just was not forthcoming, there wasn't anything below the surface that the movie didn't tell us out loud.  A love story popped up, a mother-replacement figure appeared, a little racism reared its ugly head.  But I was left wanted less; less obvious morals, less forced emotion, less overacting.

And the acting itself was a major problem.  I strongly disliked Helen Mirren as the French restaurateur.  I thought her accent was bad, her face looked odd, and her entire character was a cheap version of what a real person would do & say.  Her moments with Hassan were so stereotypical, so "I'm a real chef, you're just a silly Indian boy."  Manish Daval as Hassan was probably the strongest actor in the film, even including his scenes with Mirren.  He was at least likeable, if not exactly stellar.  His character was a bit one note and his love interest was completely uninspired, but I did root for him to be happy, which is something.  The film as a whole bored me.  It just wasn't great, wasn't entertaining, dragged far too often, and left me wishing I had watched it as an episode instead of as a feature length film.  Although, I doubt the same story on television would have been any better, but than at least I wouldn't have felt compelled to watch it. 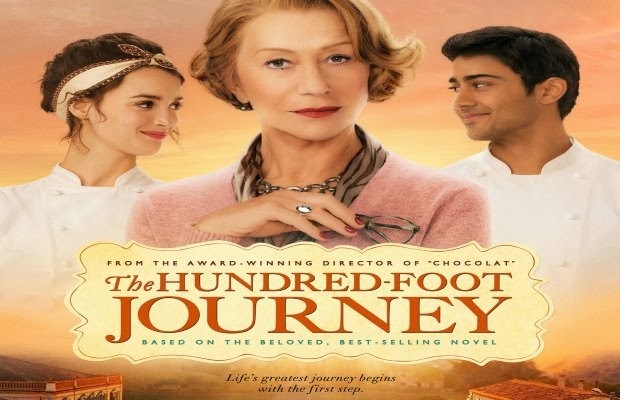