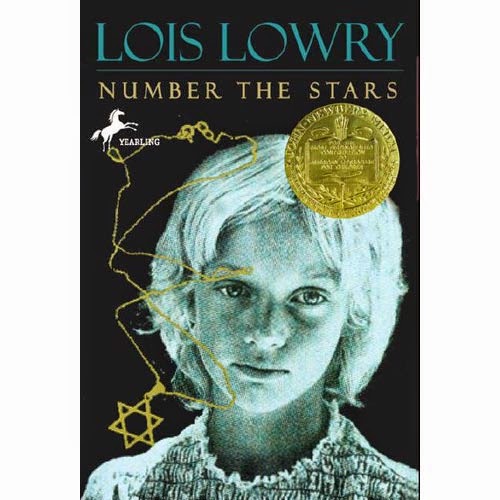 
Lois Lowry is also the author of the well-known novel The Giver.  The majority of American children read that at some point in school, and it's a book I've read half a dozen times, a story that changes with each year that you age.  Recently I reviewed the movie version of the novel; you can link to it above.  Ultimately, it was an OK version of a great plot, a vision I didn't share but one that didn't totally upset me.  But I digress.  Lowry's second most famous book is Number the Stars, another one directed at a younger audience.  It's historical fiction, not sci-fi, but it also takes a look at mankind and how we treat one another, how we live in an imperfect world, and how we can be brave in the face of injustice.

The year is 1943, the place is Denmark.  The Danish people, having very little in the way of military might, have surrendered to Nazi Germany.  Soldiers occupy every street corner in the capitol city of Copenhagen, and although there is no bloodshed there, the native people are suffering.  Rations are limited, curfews are enforced, and the pride of a nation has seemingly vanished overnight.  But there is a secret undercurrent of Resistance moving beneath the boot of the Nazis.  These brave young men & women fight to protect the Danish people, especially the Jewish families.  And so when the Germans move to round up the Jewish community of Copenhagen, they find them mostly gone.  People like Annemarie Johansen and her family have taken in their friends, hidden them, spirited them away, all under the watchful eye of occupation.  Though still young, Annemarie begins to understand the danger facing her best friend Ellen Rosen and to face the evil that terrifies her so much with a bravery that not even she knew she possessed.

I wish I had read this book when I was young.  I think it would have meant more to me then and I also think it deserves that respect.  It is written for a young audience, perhaps for those learning about the Holocaust for the first time.  Though sad, it's not gruesome, looking at the war through the eyes of a girl who saw hope & support, not death and terror.  It allows the reader to see the good that was done during this horrible time, the lives that were saved by the bravery of a few.  And so it comes off as a bit juvenile, but that's not a negative to be held against the author.  I still enjoyed The Giver more; the sci-fi element, the depth of meaning, the ending that adapts to the age of the reader.  But Number the Stars is a story that should be read & shared, an important time capsule that shouldn't be forgotten.  Although it is fiction & was written in the 80s, Lowry explains the true story behind her words at the end of the book.  I found this afterword to be the most moving part of the novel, so make sure to find a copy that includes this short description.