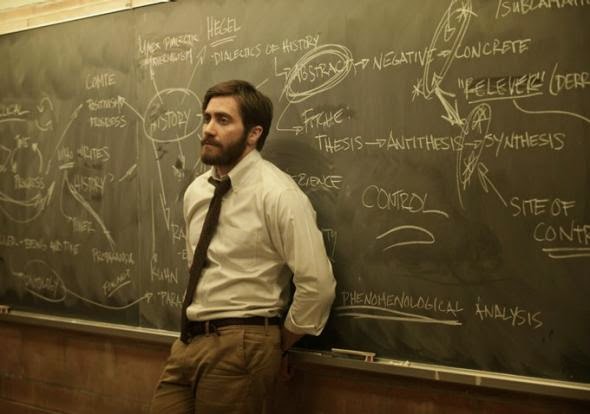 
The only other Villeneuve-directed film that I have seen is Prisoners.  It also stars Jake Gyllenhaal, is also frighteningly dark, and is also great.  It actually also came out in 2013; an excellent year for an excellent director.  Villeneuve is just making his move from Canadian to American cinema, but I think he'll be a talent to watch in the next few years.  He has a good feel for mood, an ability to self-edit, and an original voice that I think will transfer very well & often to the screen.  In 2015, he'll be releasing Sicario, a crime/drama starring Emily Blunt, Josh Brolin, and Benicio Del Toro.  In 2016, he'll be directing Story of Your Life, a sci-fi film starring Amy Adams.  So anyway, I'm looking forward to seeing what this talented director brings to us in the near & distant future.  Why so excited?  Because Prisoners was great and Enemy is even better.

Adam is a little messed up.  He's a history teacher in Toronto, lives in a bare apartment downtown, has a girlfriend who is sexual yet distant, and repeats the same depressing, daily patterns that are getting him nowhere but down.  But things are about to change, although perhaps not for the better.  After watching a random movie, Adam wakes up, runs to his laptop, fast forwards through the film, and stops at a scene in which he himself is playing a bellhop.  At least it looks like him, exactly like him, and a little research reveals a man named Anthony who both sounds like Adam and is identical in every physical way.  How could this be possible, what does it mean, and why have these two men never met before?  They lead very different lives; Adam with his sad routines, Anthony with his exciting career, motorcycle, and pregnant wife.  And yet there's a connection, a secret that is almost unfaceable, a story behind this seeming coincidence that just might destroy both their lives.

After just watching Under the Skin, I thought that was one of the strangest movies I've really enjoyed in a long time.  Enemy has it beat, both in rating and in oddity.  To put it in perspective, I finished watching the film, watched a YouTube video of a critic's theory on what the hell just happened, sat for a time thinking about the story, and then decided I had to watch it again.  It's one of those plots that makes very little sense while it's happening, a story that you are trying (and failing) to keep track of while it's playing, a movie that ends & you say "WHAT?!"  If you like that sort of film, please watch Enemy so we can talk about it.  Also, if you have seen it and could use a summary/opinion on the meaning of the film, check out this "explanation".  It helped me gather my thoughts, and although it's of course not the absolute end all be all truth, it's a nice aid to appreciating the movie.  But it's one giant spoiler, so don't watch it unless you've seen Enemy and want to know more.  On the flip side, if you don't like having to work to enjoy a film, stay away.  It's unconventional in every way, and even phenomenal acting from Jake Gylenhaal won't keep you entertained unless you want to be forced to work through the plot like a puzzle.  This is a difficult review to write because I'm not critiquing the usual features, but it's that sort of thing.  Enemy is great because it's different, it's complicated, it's surprising, it's not easy to watch, but in the end it's rewarding in a way that very rarely happens.