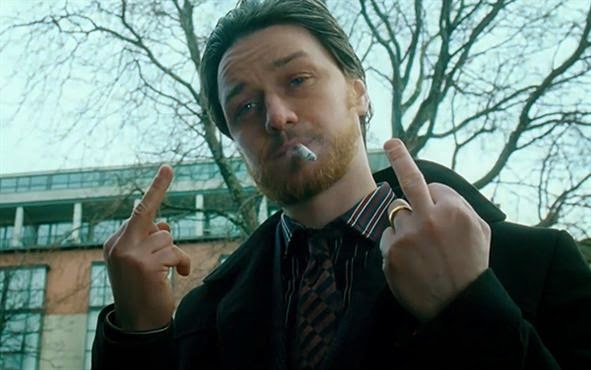 
James McAvoy is having himself a nice couple of years.  After bursting on to the American movie scene with The Chronicles of Narnia (2005), The Last King of Scotland (2006), and Atonement (2007), he's been relatively quiet.  But recently this Scottish actor is back in business.  With roles in Trance, The Disappearance of Eleanor Rigby, Filth, Days of Future Past, and Frankenstein, he's forcing himself back into the spotlight.  I've always considered McAvoy to be a good young actor, but not until Filth did he impress me as great.  It's a film that takes a special kind of character actor to pull off, a lead man who's both cool & detestable, and McAvoy delivers what might just be the best performance of his career.

There's only one thing on Bruce's mind and that's a promotion.  He might be a Scottish detective who loves drugs & sex, who rarely showers, and hates everyone he works with, but man is this up-for-grabs promotion important to him.  He's having some trouble at home and, in his mind, securing his police career will make everything right.  And so he goes on a mission, a terribly destructive mission to annihilate the chances of everyone else in the department in order to guarantee his own success.  It's relatively easy to ruin the life of a supposed friend; lie to them, blackmail them, sleep with their wife, convince them to photocopy a picture of their small penis.  Bruce will stop at nothing to get what he wants, even drugging himself into a stupor in an attempt to conceal the truths of his awful life and the horrors that he's run from for so long.

Never saw it coming, just had no idea.  The film started strong, I was interested, and then it never backed down.  It began with a very dark Snatch feel; some crime, think accents, clever direction, a cast of characters.  And then it turned into Trainspotting (same writer); drugs, hallucinations, a spiral downward that is hard to watch.  It was a shock of a film, a story that was both painful & hilarious, actors that gave every ounce of themselves despite a raw plot that didn't ask to be excused.  And through it all, James McAvoy was brilliant.  He delivered an amazing performance made all the more impressive for being set against a backdrop of insanity.  He was believable, pathetic, disgusting, funny; a hero and an anti-hero all rolled into one.  Filth will be a lot to handle for a lot of audiences based solely on the material.  But if you don't mind getting your hands dirty, you'll be treated to an excellent film that could possibly push your Top Twenty.