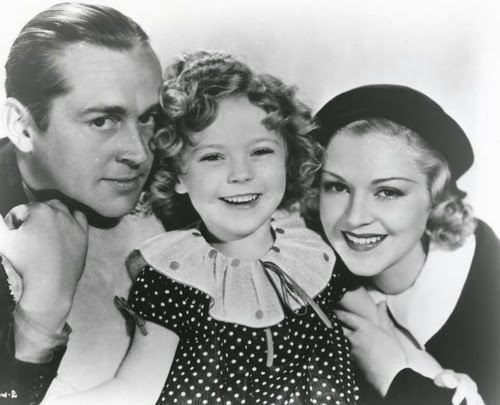 
I kinda watched this movie by mistake.  My wife wanted to revisit an old Shirley Temple film, a blast from her past, and I went along, vaguely remembering Heidi & Bright Eyes from my own youth, two of Temple's more famous films.  Well something went weird, a mix-up at the library or user error or something, but Baby Take a Bow was the movie we accidentally ended up with instead of something a bit more iconic.  Still, it's a Shirley Temple movie with a little bit of music and dancing, a melodrama from the 30s; how bad could it be?  And although that sounds like a set up for a let down, this isn't a negative review.  With such a dated film and with so many early day flaws to forgive, it's hard to pin down a rating.  But Baby Take a Bow is definitely not a classic that makes you forget the year it was made, nor is it a showcase for Temple's talent.

Eddie might be a convict, but he's not a bad guy.  He does his time, learns from his mistakes, and vows to become an honest man.  There beside him is the gal that never left, Kay, who believes her man really will go straight.  Eddie & Kay get married, have a little girl, and do stay out of trouble, even helping Eddie's buddy Larry, an ex-con on the same road to redemption.  But there's trouble brewing.  A detective name Welch has it out for the pair, won't be convinced that they're clean, and is ready to pounce at the first mistake.  And so when valuables go missing at Eddie's employer, he's the first suspect, a situation that's especially fishy when little Shirley starts playing hide-and-seek with the stolen treasure.  A caper of ridiculous proportions ensues, and who knows who will come out on top.

It's a silly plot, but one you gotta forgive a little, coming from 1934 when stories were a bit more simple.  There are villains, crooked cops, man servants; it's a melodrama just short of the train tracks.  It's entertaining at least, with some humor, some prat falls, a touch of song-and-dance.  But it's nothing like what I was hoping to see from a Shirley Temple movie.  She wasn't the star here, though she had a nice-sized part and shone in every scene.  There's no doubt about it, she was an amazing talent, even at six years old.  The movie as a whole was just OK, disappointing if you're looking for classic cinema, pleasant if you're looking for a relaxing 70 minutes.  Now I've got to find a better Temple film, something with the great old songs, something with the magic that made her famous.