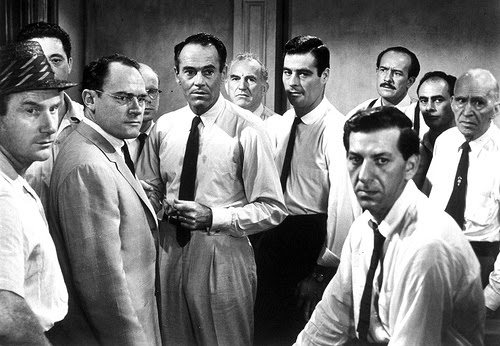 
Why am I constantly surprised that classic books & films are every bit as amazing as they're supposed to be?  You'd think after the first one hundred times I'd come to expect that a story that is still considered great after one hundred years is, simply, great.  Whether it's reading classic literature (A Little Princess, A Christmas Carol, The Time Machine) or watching a classic movie (An Affair to Remember, Singin' in the Rain, Mary Poppins), I should just assume that what I'm about to ingest will be wonderful.  If it's not, I can always be shocked, write a scathing review, and poke fun at all the people who like something that's clearly not as good as they say.  But I might as well err on the side of appreciation, because more often than not there's a reason why a story has survived intact until now.  12 Angry Men fits into the category of a film I always heard was incredible and, not surprisingly, it is.

The plot could not be more simple.  Twelve jurors convene in the deliberating room to discuss the murder case they just witnessed over the course of a week.  A young man was seen & heard killing his father, though he touts his innocence.  The defense didn't put up much of struggle, the prosecution had truck loads of evidence, and the jury is prepared to dole out the death penalty after what they assume will be a very short discussion.  But one man, Juror #8, isn't quite ready to sentence a man to death.  He is the lone dissenting vote, much to the displeasure of everyone else, who all just want to get on with their lives.  But #8 knows that it's another man's life that's at stake, something he cannot take lightly.  So he presents his case to his fellow jurors, showing them & us that personal prejudices and shortsightedness can cloud even the sharpest mind.

It really is incredible how a film can be so relevant and perfect after more than fifty years.  I guess that's why they call it a classic.  It's timeless, and not only that, it's one of the best movies you'll see.  The story is impeccable, coming across more like a play than a film, which of course it was at first, being quickly adapted to the screen after its initial success.  There's a phenomenal amount of driving action for such a small room, as the actors never really leave their confined space but somehow use the floor in way that probably has every director salivating.  And the characters, wow, perfectly defined and thought out.  I can picture every juror and their personality, even though they were known by nothing but a number, each exhibiting traits that stand out but also blend together into the group.  Taken as a whole, the group is one man, one mind, one ball of thought that fights against itself as often as it works together to make a decision.  This is a film of many layers, a story I could watch again right now, a movie that is timeless in a very special way.