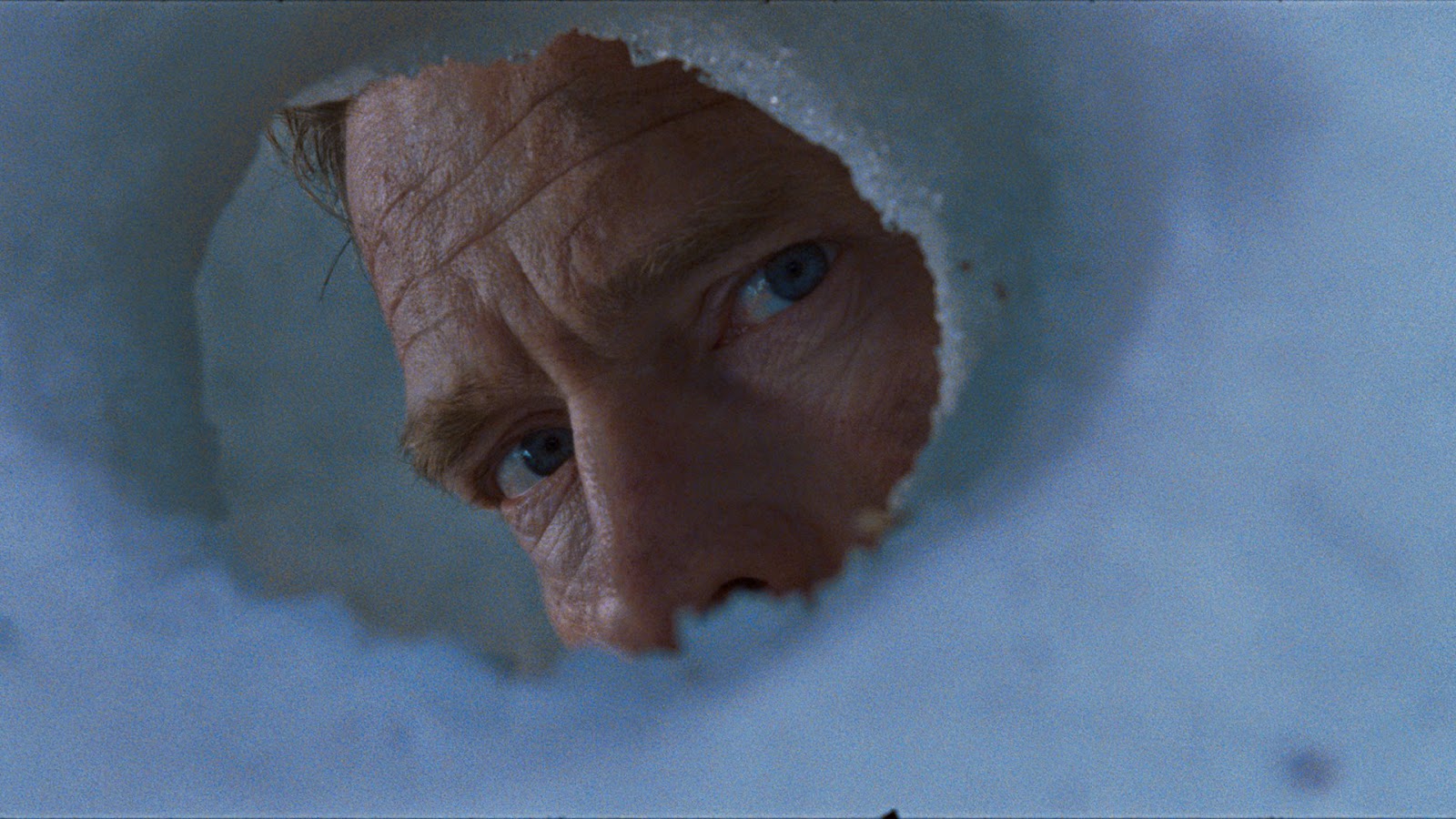 
The summary for Whitewash on the back of its DVD case says that it's "a darkly comic noir in the vein of the Coen Brothers."  A pretty specific claim, and a ballsy one at that.  I guess it doesn't take much to be dark, just kill off a few characters and feature depressing aspects.  Darkly comic though, that's something else entirely.  It takes talent to create a balance between funny & horrible, to manufacture a situation that forces audiences to laugh or go crazy.  And lastly, to emulate the Coen Brothers?  That's something almost no one can do, a difficult task for even the most talented directors, let alone one who's attempting his first feature length.  So going in I had my doubts about a film that claimed so much.  Turns out, they had a right to. 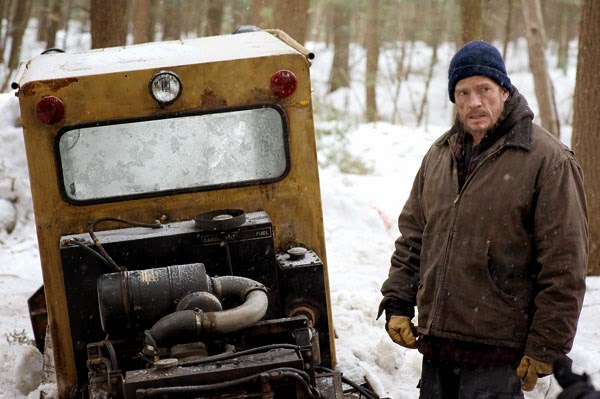 The story begins in the snow.  A plow operator named Bruce drives around in a blizzard, drinking & not really making an attempt to make a difference on the roads he's speeding on.  We don't know his story, don't know exactly what he's doing, and are not prepared when he suddenly runs into a man who is standing in the middle of the road.  Just like that the plot begins.  Bruce hides the body in the snow, drives off into the wilderness, crashes his plow, and wakes up the next morning almost as confused as we are.  At first he attempts to leave, but having no idea where he is and no supplies makes this a little tricky.  So he returns to the crash site, begins to forage for supplies, and creates a temporary home for himself in the woods.

And now, slowly, the story is revealed to us.  As Bruce focuses on survival, he also flashes back to the events that led him here, the catalysts that created this awful situation.  It's all tied to a man named Paul, a man who stayed a few nights at Bruce's house.  We begin to find out why, where he came from, how the two men became companions, and the problems both of them faced, problems that led them both to bad decisions and worse luck.  And meanwhile, Bruce is finding it harder & harder to leave his new living space.  Doing so would mean facing his issues, his crimes, the world; it would be much easier just to live in the woods with only his slowly deteriorating mind for company.  So the days march on, revealing more & more of the truth, driving Bruce further & further into his own head, a place that might be the most dangerous. 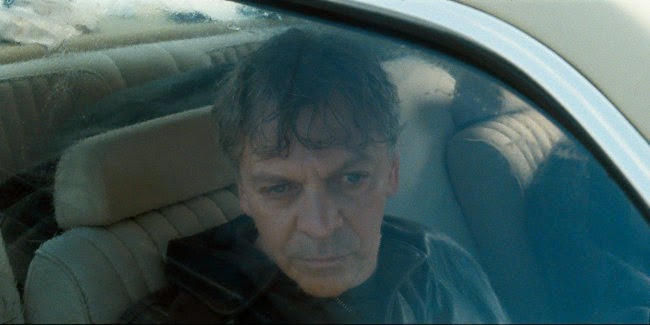 Surprisingly, Whitewash was everything it claimed to be.  It was very dark of course; after all, it was about killing someone with a snow plow.  And the darkness extended both ways, into the back story and forward into the woods.  It's a heavy plot, made more so by Bruce's constant introspection, his walking the edge between control and the life of an animal.  But the pleasantly surprising element here was the humor.  It's not easy to create a depressing plot and then to cleverly lighten the mood, but the director was able to pull it off.  The comedy never felt silly, it was always appropriate, always tongue-in-cheek, and always well balanced with the darker elements.  It was so often one of those situations of laugh because what else are you gonna do, the world's gone insane.  Credit to the entire crew for putting together complicated entertainment.

And maybe even more surprisingly, the film was a little Coen Brothers-esque.  You could say it mimicked Fargo just as tad, but is that such a bad thing?  As long as it doesn't rip the movie off completely I'm all for an amateur director using a proven film as a guideline for the feel of his new project.  It didn't copy it, didn't seem like a Coen Brothers wannabe film, but did exhibit a bit of the same dark humor, cold calculation, and callus decision-making.  Thomas Haden Church was key to making the film a quality homage and not a poor attempt.  He was invested in every scene, quietly captivating, and perhaps presented his strongest character since Sideways.  He held back in a lot of different ways when he could have taken the story over-the-top, something I always appreciate.  Let me enjoy the film through my own eyes, don't try to do too much, give us quality acting, and then let the story speak for itself.  Seems easy, but is anything but; Whitewash pulled it off.

Video - With an aspect ratio of 2.35:1, the video was very strong.  The scenes were all well-crafted, with a darkness that mirrored the plot and shooting that let the story tell itself.  The visuals were pretty cool; the snow, the woods, the plow.  And the picture quality held up throughout, with a nice balance of color and great clarity.

Audio - The DVD was done in Dolby Digital, with an option between Stereo and 5.1.  There is a choice of subtitles; English or English for the Hearing Impaired.  The audio was solid, with appropriately creepy music and good sound quality throughout.

Extras - The only extras on the disc are trailers: Whitewash, Wendy and Lucy, Terribly Happy, Rare Exports: A Christmas Tale, We Need to Talk About Kevin. 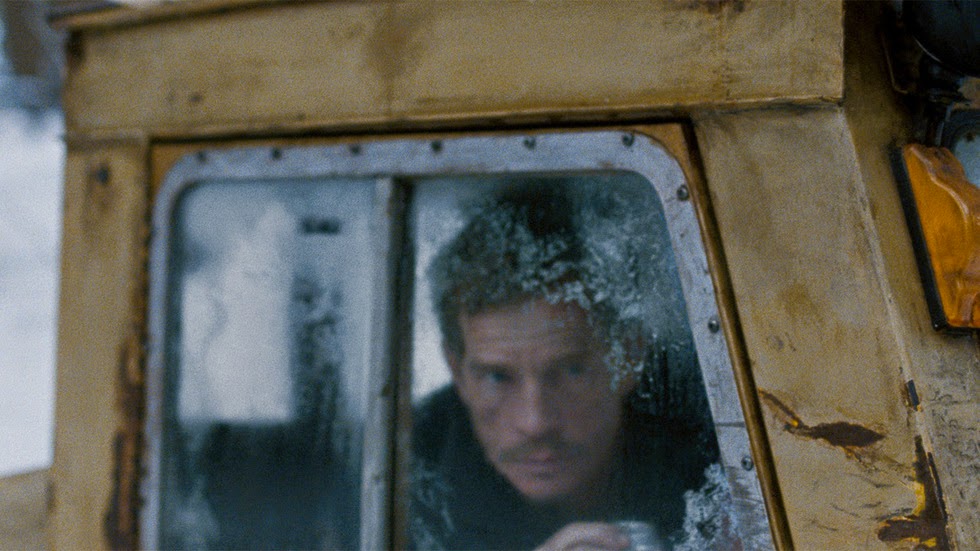 Recommended.  Whitewash isn't a must-see perhaps, but it's a film that pulls off an incredibly difficult challenge.  It's a cold, hard, funny, black comedy/drama with a touch of Coen feel that presents a story starkly and without embellishment.  It's entertaining while being heavy, solid & strong in ways that aren't easy, and shouldn't be under-appreciated.  The video quality is high, as is the audio, and there are a few extras on the DVD.  Overall, a good watch well made.