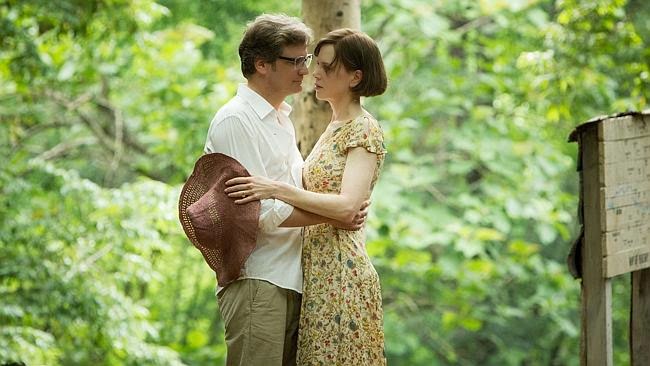 If you're anything like me, the WWII/prison camp/slave labor/secret plot/torture storyline is what got your interested in this film.  It has worked basically since the war, stories based not on the war itself but on the periphery, on the people whose lives were defined by their roles in the struggle.  If you want to see a phenomenal POW movie watch The Great Escape or The Bridge on the River Kwai, two five-star films that will give you everything you want out of the genre; drama, despair, perseverance, death, hope; everything you don't get from The Railway Man.  It came as a compete surprise to me, but the film is only 1/3 war.  Another 1/3 is Colin Firth looking troubled, while the last 1/3 is Nicole Kidman looking sad.  The story might be true, but it was not what I was looking for, leaving me quite disappointed.

Eric Lomax is a solitary man whose only passions are trains and weekly pub meetings with his fellow veterans.  Lomax served with the British in Singapore during WWII, specializing is radios, communications, engineering; the technical side of the war.  But this relative safety didn't keep he & his mates from the horrors of war, as their unit was forced to surrender to the Japanese and was imprisoned in a camp building a railway through the jungles of Southeast Asia.  There,  Lomax suffered in a way even he can't deal with, and years later the torture is still haunting him.  It keeps him from enjoying his life and his new wife Patti, who can't seem to get close to him no matter how hard she tries.  And so, with the help of a friend, she attempts to break through Eric's shell, to expose the darkness inside to the light of the day, before the pain kills him.

This was not what I was expecting.  I wanted the majority of the movie to be Eric as a young man in the POW camp with only a few flash forwards to keep the plot in perspective.  And those past scenes were incredible.  Jeremy Irvine has impressed me as a quality actor (War Horse, Great Expectations) and he delivers here as well.  His portrayal of Eric as a young, bespectacled, nerdy soldier who likes trains & radios was spot on.  He and the other soldiers in the camp put on a good show, something to rival the great prison camp movies of the past.  But it was the modern scenes that fell flat.  Nicole Kidman was always too breathy & dramatic, Colin Firth too pained & introspective, and honestly they were just onscreen too much.  I wanted their roles to be small, not intricate, and I wanted the movie to be about WWII, not a love story with a long-ago war as the background.  I guess it depends on what you're looking for, but The Railway Man let me down, failing to be the historical drama I wanted it to be and relying too heavily on the over-dramatic & over-emphasized acting of two individuals.