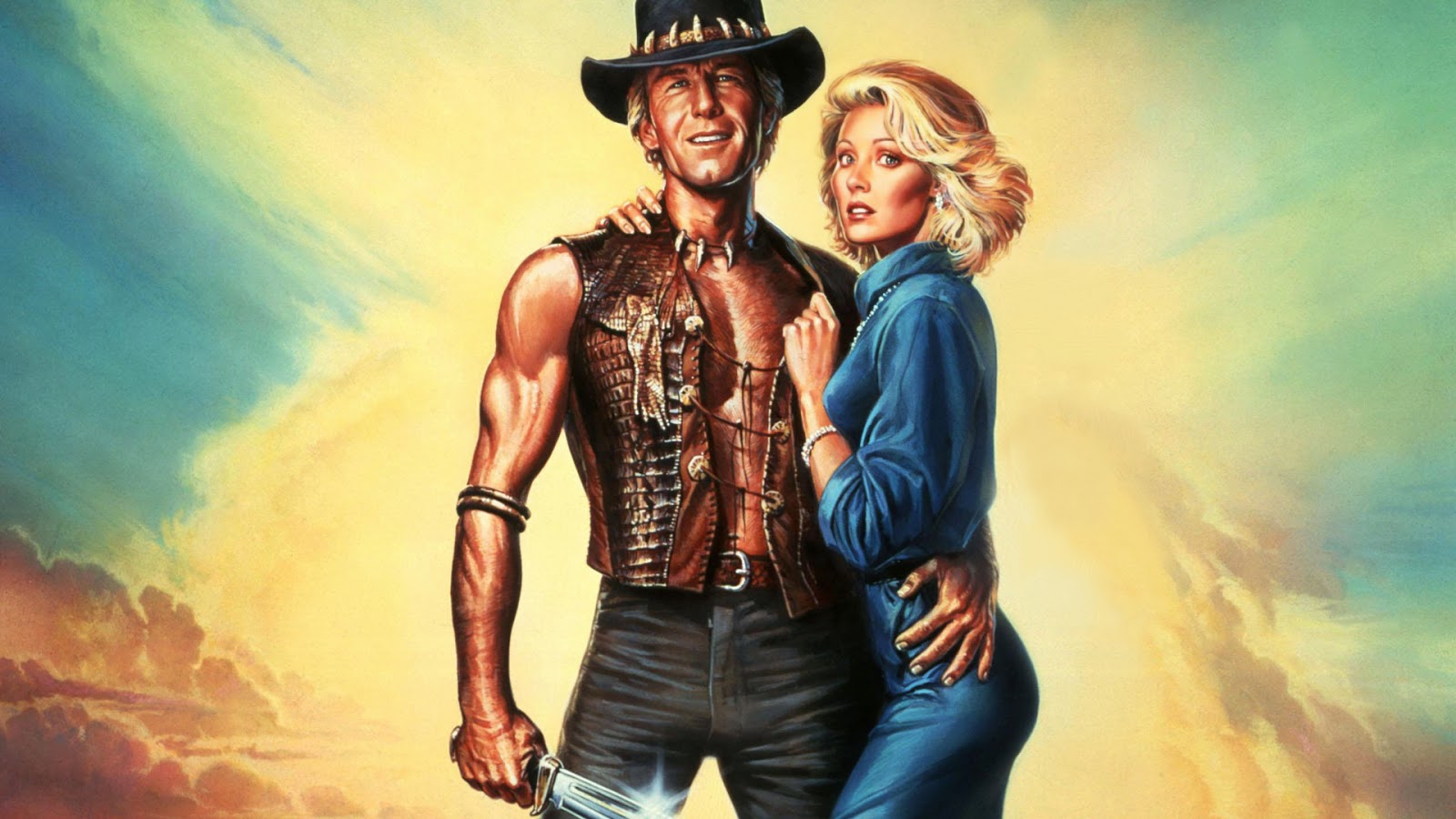 
This is a great example of a film you watched when you were a kid and probably shouldn't watch as an adult.  When I was young, this was the coolest movie.  Mick Dundee, that giant knife, the Australian bush, crocodiles galore, Aborigines.  We all wanted to be this larger-than-life figure, talk just like he did, rescue the girl, live off the land.  But revisiting the film isn't a wonderful idea.  You start to notice things like plot & acting, or lack thereof, and all of a sudden Paul Hogan isn't the best thing since French toast.  All of a sudden Crocodile Dundee is just another bad 80s movie that makes almost no effort to be good, a precursor to Bird of the Wire, a Romancing the Stone copycat, a clunker that only shines in memory.

Sue is a journalist from New York and she has it all figured out.  She's got a super-rich Daddy, she's dating a perfect socialite/editor, and her job takes her across the world to cover wonderfully interesting stories.  Her latest self-appointed assignment requires her to travel to Australia, to the land down under, to the middle of the bush, where a legend is said to live.  His name is "Crocodile" Dundee and he's a tour guide, a real wild man who's never been to a city, rarely ever leaves the wilderness, and knows how to handle just about any animal.  Sue is fascinated by this man & his country, eventually inviting him back to America as part of her continuing story.  But Dundee is a fish out of water in the States, especially in New York City, where nothing makes sense and people are so different.  He & Sue grow closer, but this life may not be for him, creating a dilemma between this modern day Tarzan and the woman he might love.

When this movie came out in 1986, Paul Hogan was 47.  Linda Kozlowski was 28.  That age difference is made even stranger by their marriage in 1990 after two Dundee movies, a marriage that would end in 2014, just this summer, after 24 years.  I guess they were in love, more power to 'em, but it is odd to see this beautiful young lady playing next to this leathery old Aussie, a romantic affair we're supposed to believe & accept.  Don't get me wrong, Dundee is cool in the film, handsome I guess, but it's still a bit of a stretch.  So is the acting, direction, and story though, so maybe a 20 year age difference isn't such a big deal after all.  I was a little disappointed with how weak the film is; I'd like to have gone on remembering it as great.  But it just wasn't; bad acting, bad dialogue, horrible music, and a dated feel that doesn't translate to today.  If you loved this movie 30 years ago, just stick to the memory; I wouldn't recommend a rewatch.  I can't stop myself from giving it three stars because of what it meant to me as a kid, but it's much more of a two-star blunder.