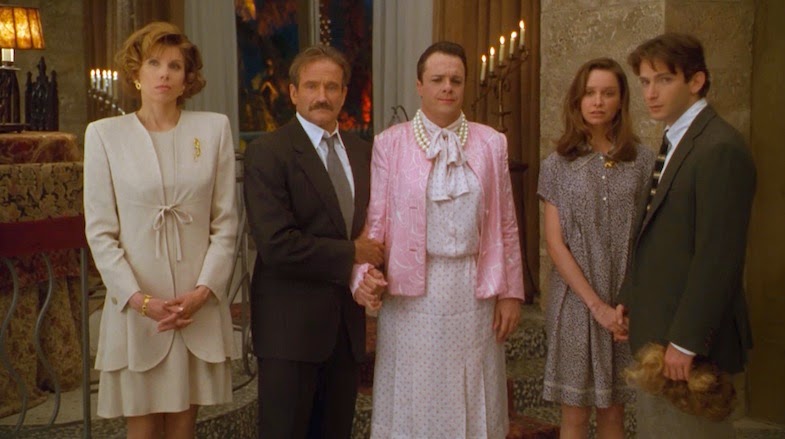 
In my Mrs. Doubtfire review I addressed my feelings about Robin Williams, so I won't go into that here.  His death is a horrible thing and I find myself wanting to watch his movies all over again now that's he gone.  But I came across one here that I had never seen, an off-the-wall comedy that I had somehow missed.  I was happy to watch it now and very happy to see Robin on screen again in yet another excellent role.  His partner in crime in this film is Nathan Lane, a man who I was sure would play opposite him superbly, and of course he did.  The Birdcage is a laugh-out-loud comedy, a star-studded ensemble that does it all right and leaves you feeling glad that you watched.

Val Goldman did not have a "normal" childhood.  His father is a gay man who had experimented with a woman and now has a son to show for it.  Val's mother isn't in the picture, but Armand Goldman raised him with loving care, albeit in an eccentric environment.  Armand in the manager of a Florida drag show, one that stars Albert, his partner and Val's other parent.  The couple love their son with all their hearts, but his most recent decision is about to cause some trouble.  Val wants to get married to his college sweetheart, a girl even younger than he is.  And not only that, but Barbara Keeley is the daughter of a Republican Senator, a man who heads a committee for "moral order".  Val & Barbara can't reveal Val's parents' sexuality at the same dinner that the future in-laws all meet, so they lie about everything.  Which of course is a disaster, but a wonderfully funny one, an evening that is torturously funny and not one to be forgotten.

The Birdcage was a play first and it feels like it.  The set screams stage and a large part of the action takes place in an apartment, including a dinner party that just smacks of Broadway.  The movie has a great pace, from scene to scene and from line to line, always pushing the story forward even when it's done in a ridiculous way.  Because ridiculous it is, but side-splittingly so.  I laughed so hard at one point that it hurt, and that's not something I do often.  Robin Williams & Nathan Lane were both amazing in their roles, their timing could not be more perfect, and they lit up the stage with their own style of comedy.  Gene Hackman was great as the stuffy Senator, Calista Flockhart made an appearance as Barbabra, and everyone obviously had a gay (pun) time creating this film.  It's a must-see comedy, especially for fans of the theatre, one that forces you to keep an open mind and dares you not to laugh.