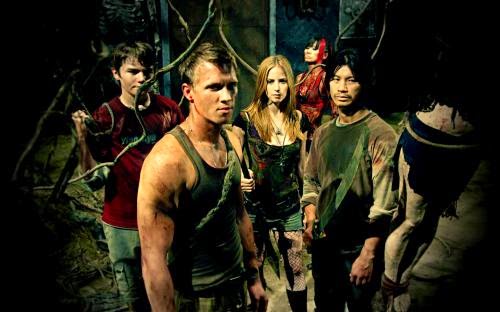 
What a terrible name for a movie.  And, just so you know, the plot has barely anything to do with games or with assassins.  If you want your movie to be taken seriously, you ought to think about audience reception.  You hear a title like this and you immediately start thinking b-movie.  Which hey, don't get me wrong, I love, but do they have to be so obvious?  It's not like this is a farce or a mockery of the genre, it's a legitimate action film with an interesting plot; someone dropped the ball.  And actually, the film has an alternate title, Gauntlet, which sounds cooler & makes a ton more sense.  But maybe it's just me, maybe everyone else is fine with the name.  Regardless, the show must go on, and on it bloodily did. 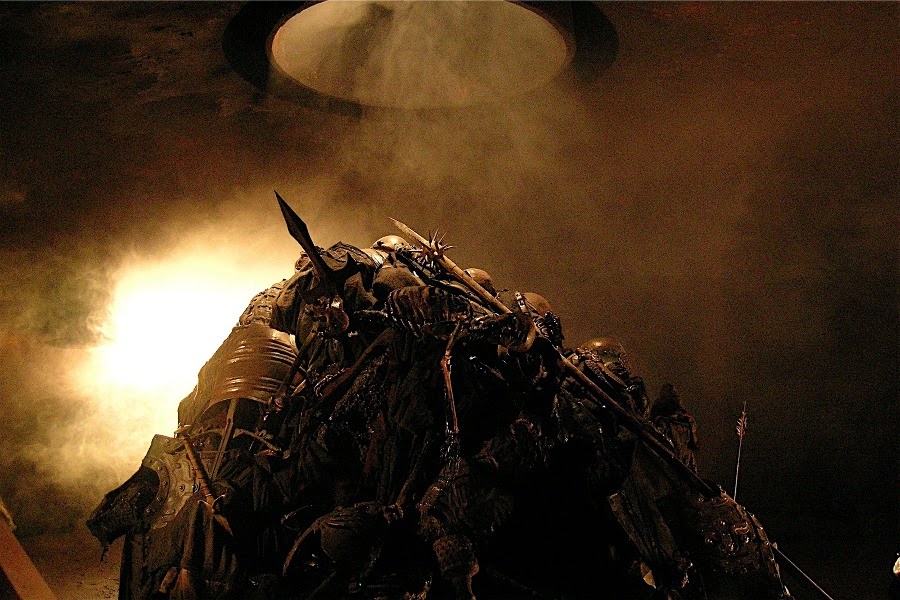 David awakens on a heap of corpses.  He doesn't know where he is, how he got there, or who did this to him.  All he knows is that he's in some type of dungeon with weapons & dead bodies and he would like to get out as soon as possible.  But first he meets Jin, an Asian-American man from Jersey who is just as terrified & confused as David.  The pair soon agree to help one another, attempting to find a way out.  Soon they stumble across Emma and Tyler, another duo of horrified travelers who have no clue as to why they're here or where here is.  And so a foursome is formed, each with a weapon to protect themselves from whatever might pop up around the corner, each with a secret which may hint to why they've been imprisoned in the first place.

Their surroundings are like a satanic prison, with torture devices and evil paintings, clues perhaps to the answers they seek.  Although, answers can wait, what the group wants now is food, water, rest, and a way out of the dark abyss that they are trapped within.  To make it out they must solve gruesome puzzles, attaining keys to allow them out of each level, moving closer & closer (supposedly) to life & a way out.   But first they meet the last member of "game", Kim, a suspicious woman who is definitely not telling everything she knows.  Hers might be the most twisted back story, but through flashbacks we begin to understand that no one is innocent here, that everyone has something to hide, and perhaps they are all in this hell for a reason.

What a strange movie.  The title really did throw me off, partly because it just sounded crappy and partly because I was ready for a game or assassins or a combination thereof.  But that's not really what it's about.  The movie is more of a gauntlet for sure, a survival inside a test that will kill you if you fail.  It was a little like the Gauntlet video game of the 80s, if memory serves.  It's been a long time since I played, but I remember the characters, the levels, the keys to each new challenge.  I guess that describes a million games, but the alternate title of this film leads me to believe there might be some slight connection or at least a nod in that direction.  At times even the action was visually game-ish, with obviously fake blood and unrealistic weaponry talent.  The set too felt like a video game, like a Zelda dungeon level, like a board you had to figure out so you could get to the boss.  Except, in this film, there were no bosses, only the characters, who will need, use, and kill each other whenever it's beneficial.

So that aspect I liked, that it took me back to my childhood when dark fantasy video games were super cool.  But it's still a film, an action flick that needs to be judged as one, and that's where it came up short.  All the different characters were interesting, but it was unfortunate that every one was badly acted.  I guess I wasn't expecting much from a movie of this caliber, but a little more effort would have been nice, a little stronger attempt to build the depth of the roles and not just superficially let us know that everyone has demons.  And the ending, as much as I can say without being a spoiler, was bad.  I could see a hundred different paths that I would have enjoyed more, a hundred different story arcs that would have made me happier.  Instead, what we get is a bunch of strangers trapped somewhere creepy, some difficulties getting out, and an unsatisfying conclusion.  Yep, sounds like a video game, and not a great one.  At least it was kinda fun playing.

Video - With an aspect ratio of 2.35:1 (16x9 Widescreen) you'd expect better, but what you get is something far worse.  The video was very poor, with bad camera work, too-tight spaces, and bad color.  The picture quality in general was bad; grainy, uneven, and not at all visually appealing.  Fake blood, dirty dungeons, limp bodies; pretty amateur stuff.

Audio - As far as options go, the DVD allows the viewer to turn on English or Spanish subtitles; there are no more audio choices.  The sound quality was pretty awful too, with a muffled feel, an unbalanced mix, and unimpressive work in general.

Extras - There are a couple extras on the disc.  Three deletes scenes give a little more insight into the plot: What is a Gauntlet, Stay Away From Me, Not Once.  There are also four trailers: Game of Assassins, No Vacancy, Alpha Alert, Brawl. 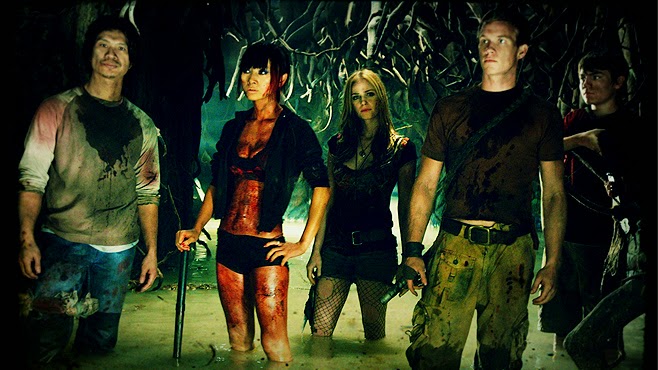 Rent It.  Game of Assassins is not at all what its title or DVD cover might suggest.  It's not fantasy exactly, it's more horror, and it's definitely not a b-movie spoof.  It's an action film that tries to tap into the human mind and make us feel trapped right alongside the characters.  Well, I liked it for its video game feel, but I can't say to much in defense of the rest.  It isn't a well-made movie, but it's also not crap.  There are cool aspects to latch onto if you're willing to forgive a lot of failings, making it a cheap rental and nothing more.