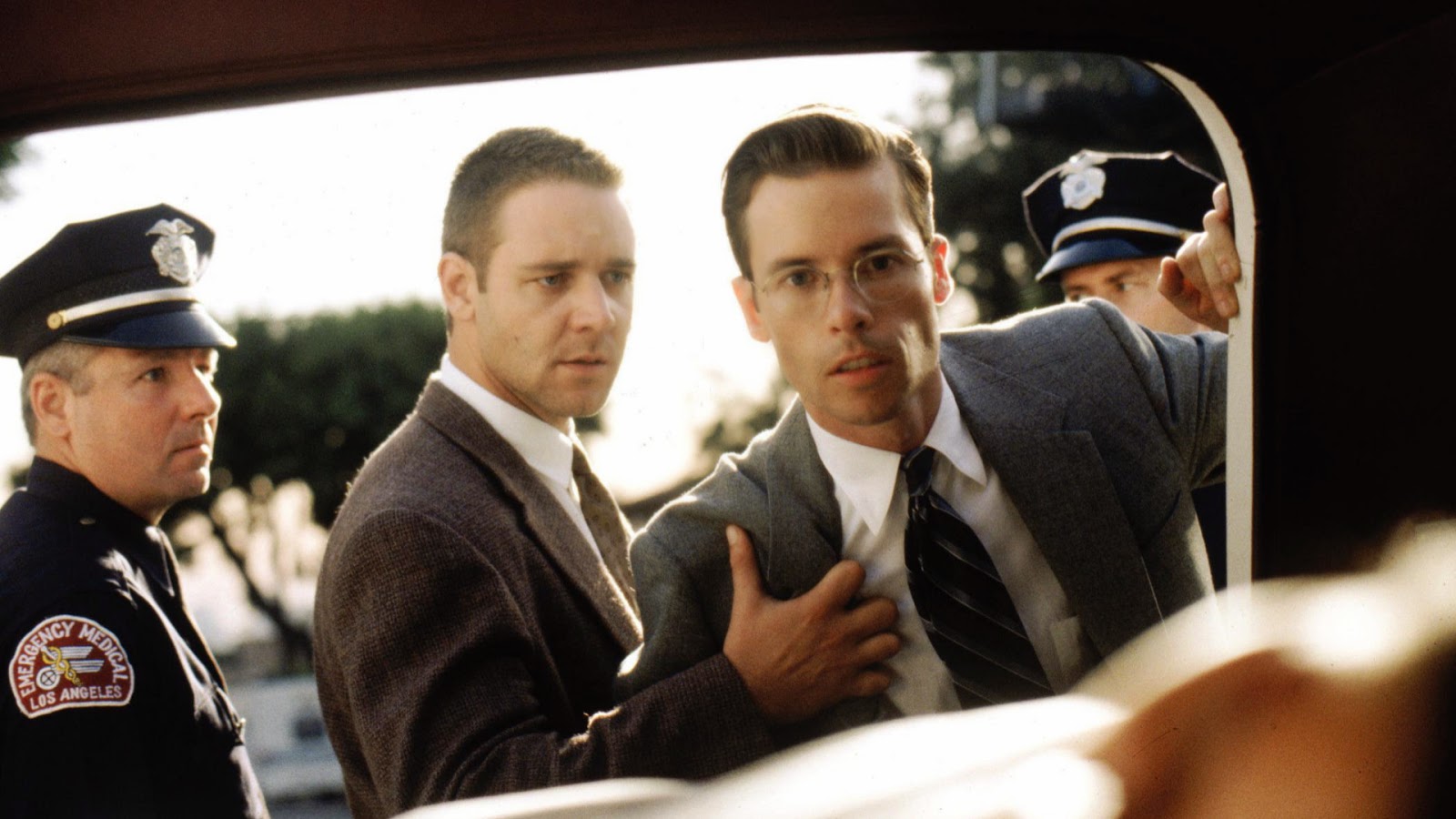 Sometimes a movie is exactly as good as people say.  On the flip side, every once in a while your personal taste will get in the way and those supposed sure things are perfect bombs (Avatar, Gravity), but if you hear enough rave reviews from enough sources there's a great chance the film will live up to the love.  L.A. Confidential is, fortunately, in the first group, a movie that I've always heard was excellent and hey it turns out it is.  On IMDB the film get's a 9/10 from critics, an 8.3 from users, and on RottenTomatoes it gets an 8.7 from critics, a 7.6 from users.  Pretty solid ratings for a movie from the late 90s that was nominated for nine Oscars.  I guess I should have watched it sooner & should have seen its superiority coming.

Los Angeles.  The 1950s.  The battle between organized crime & the city cops is the biggest storyline behind which celebrity will appear in which picture.  Actually, cops are celebrities themselves, hitting the headlines of the local newspapers for each big drug bust, careers living & dying based on how much the public loves them.  In this confusing & exciting era, three very different policeman are about to get involved in the case of the decade.  Bud White the muscle, Jack Vincennes the smoothie, and Ed Exley the do-gooder; they all have a personal stake in the latest murder case and they all want to be the one who breaks it.  But they'll have to work together to solve the puzzle, a mixed-up challenger if there ever was one, a crime that will rock the city to its foundation.

I don't even like mobster/police movies, especially not from this time period.  The dialect, the verbage, the culture; never really grabbed my interest.  And I can't help thinking about Gangster Squad when I think about this genre, or The Black Dahlia, two movies I definitely did not like.  So I was prejudiced coming it, but thankfully that was short lived.  L.A. Confidential did everything right when so many others of the same type do everything wrong.  The director stepped away, even the writer to some extent, and the film became about the actors.  They were all phenomenal, especially Crowe & Spacey, with Basinger even winning an Academy Award.  The characters were perfectly believable, and so their dialogue never felt stupid, their actions never corny.  Good acting will win me over every time, and it did here in a genre that will never be my favorite.  I easily became enmeshed in the story, started to care about the plot, and ending up enjoying myself way more than I thought I would.  Add me to the list of critics singing this film's praises and recommending that you watch it if you care for quality cinema.