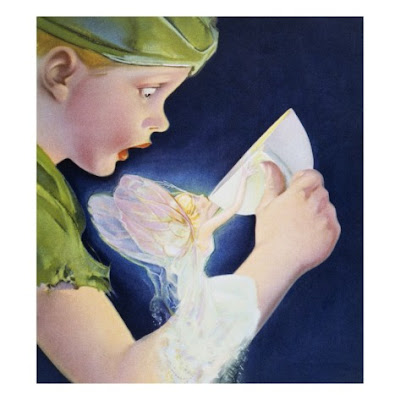 We've all heard the story of Peter Pan, the boy who won't grow up.  There are so many different versions, just among movies.  And then there are books, plays, TV shows, spin-offs.  My daughter is really into Pixie Hollow, a complete world of characters and adventures (and products) that all came from the original story.  I was even in the play in high school, long long ago.  I played Captain Hook, quite well I might add.  But even though I knew the plot very well, I had never read the book.  It was a play first, of course, turned into a book, and then spawning innumerable adaptations.  But the book remains as the pinnacle of Barrie's wonderful story.

Peter Pan is youth personified.  He is the boy who will remain young forever, but only if he stays in the Neverland, a world that exists through the imaginations of children.  Three such young believers are Wendy, John, and Michael, well-to-do British children who truly think that Peter is a real boy.  And when he visits them one night this is proven to them, and they immediately embark on a journey to the Neverland, leaving their old lives behind.  They will from now on live underground, fighting pirates, competing with Indians, hiding from the wild beasts.  One adventure after another assail the children and their hero Peter Pan, eventually culminating in a final battle with the dreaded James Hook, and forcing them to choose between a live of dreams and one of responsibilities.

It's hard to recommend a book to someone who already knows the story by heart, but I hope I can make it clear that this was one of the best books I have ever read, and that you should read it too.  I almost cried at the end, and let me say that that does not normally happen.  Not only was it very well written, especially for it to slide so easily across one hundred years.  But it was also deeply stirring.  It got inside somehow and made me contemplate every chapter as if it were a hidden message meant just for me.  Every character was a metaphor, every event an example, of youth, time, selfishness, growing up, giving up.  It's not surprising that this simple story has created so many copies, because each individual must see something unique to them inside the text and inside one of the characters.  The book was almost prose at times, beautiful to read, with great descriptions and quick wit.  But the excellence of the story was in its depth, bluntly telling the truth about life using a crocodile, a pirate, a child.  Everyone should read Peter Pan, as it has something to tell us all.