Movie Review - Land of the Dead 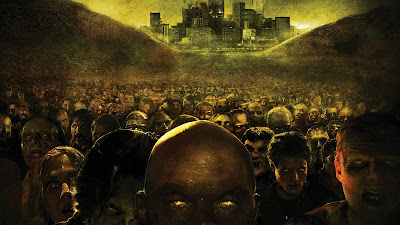 
Not many zombie movies have this much star power in them.  I mean, not like these guys are huge stars, but they're at least known actors that should push the movie above the B category.  Simon Baker is best known for The Guardian and The Mentalist.  So, basically he's a TV actor, but he's done some pretty awful movies as well: Red Planet, Sex and Death 101.  Come to think of it, John Leguizamo and Dennis Hopper have done their fair share of horrible films too; they starred together in Super Mario Bros., a movie that's kind of enjoyable to watch even though you know it's the worst thing you're likely to see for the next couple years.  So I guess maybe "star power" is the wrong phrase, and maybe I should have been more wary of this movie than I was.

The story begins with a fact; humanity has lost a war and with it the planet.  Zombies have taken control of the world, and humans have fled to the cities where they have created outposts that hold the undead at bay.  Some brave souls venture out into the suburbs, collecting whatever food and necessities they can find.  One such scavenger is Riley, who dreams of leaving the overcrowded cities behind and making his own way far from civilization.  Standing between him and his dream are his ex-partner Cholo and the ruler of the city Kaufman.  Riley's plan gets even more complicated when the zombies begin to show signs of intelligence, following Big Daddy, a ghoul with a mission; to take down the city, to destroy the humans, and to find a place where the undead can survive.

I was tricked I think.  It was enticing to see a zombie movie that had some real actors in it, and the plot actually seemed interesting; it was supposed to be about the despot ruling the human world, the chaos of the city, the breakdown of civilization.  Well, all that got thrown out the window pretty early.  It turned into your basic b-horror flick, with people eating other people, heads getting chopped off, and blood galore.  Not that I mind that, I like these types of movies, but I just thought I might get a little more from this one.  What I got was some awful acting, especially from Simon Baker, with no redeeming silliness that usually comes with bad movies.  It was like they were taking themselves seriously but doing a horrible job.  Not good, and not fun to watch.