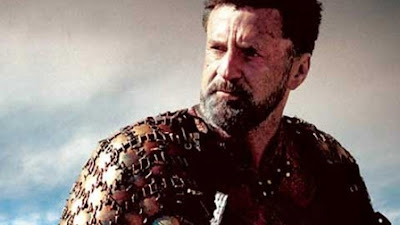 This is a movie of many titles.  The DVD has it entitled Dragon Knight.  The original French title is Recontre avec le dragon.  And IMDB has it labeled as The Red Knight.  Whatever you choose to call it, the multiple names are a sign of the confusion to come.  There is not a single dragon in the movie, nor can we ever be sure that a dragon played any part in the story.  That's fine, there doesn't have to be an actual dragon; you could argue that the legend of the dragon is what's important to the plot.  But then there's the French vs. the English title.  Sure, it's a foreign film, why not.  But again, it's a clue as to what's to come.  And what came was some of the worst dubbing I have ever sat through.  So take the uncertainty of the title as a sign and be prepared for what turned out to be a very odd film.

Legend has it that a man baptised by fire has become one of the greatest knights in history.  His name is Guillaume, and in his youth he saved his friend Raoul from the dragon's breath.  In the process, he was horribly burned, surviving but paying a horrible price.  The scars he will carry for a lifetime, but legend also claims that this brave warrior can never die, can never be defeated, that he is blessed by the fire.  Years after the event his exploits have not been forgotten.  Books have been written about him, and he has become a famous knight, idolized by many.  One such believer is Felix, a young boy who carries an ancient book with him as if it were the Bible, hoping to one day meet & squire for his beloved hero.

When Felix finally meets Guillaume, all is not as he imagined it would be.  The Red Dragon is no more than a bounty hunter, attempting to find the renegade Hugues, return him to the Pope, and collect a handsome reward.  Also on the trail of the runaway is Mespoulede, Guillaume's rival.  The two fight for the right to the prize, with Felix a near helpless tag-a-long.  But there is even more to the story that will make it even harder for Guillaume to complete his mission.  He is being followed by his now mad friend Raoul, who is cursed and damned and totally insane.  Something happened years ago between the two near brothers that has driven a wedge between them, something that haunts them still and will ultimately help to decide the fate of all involved. 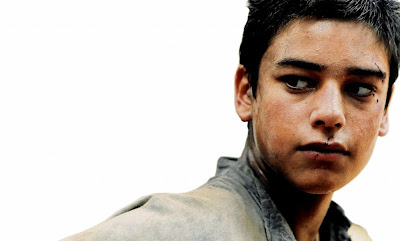 First, the dubbing.  I'm not sure who did it, but it sounds like it was perhaps a high school class.  I've heard some bad voice-overs in some bad b-movies, but this has to be right up there with the worst ever.  Not only was it horrible acting, but the voices themselves didn't seem to fit the characters at all.  Guillaume sounded like he was seventeen.  I could have done a better job, and I really hate when that happens.  Me and my friends shouldn't be able to go in the basement, watch the movie, find a script, read along, and do ten times better than the actual dubbers.  I mean, come on, put some effort into it at least.  Try to emote a little and inflect your voice.  I don't want to sound like my old choir teacher, but a little enunciation wouldn't hurt.

The only thing the dubbing allowed for were some cool sound effects that seem to have been added in to the movie.  Background sounds were louder than usual, but not in a bad way.  It was almost like an old radio show where someone is producing sound effects to go along with the dialogue.  Who knows, that may have been exactly what they were doing, snapping twigs whenever a character went traipsing through the woods.  But it worked, and created a extra sense of reality, of being involved in the story.  And the story itself wasn't bad.  I was interested in the Dragon Knight legend, I was curious to see how it would all play out, and I liked Felix as the boy who is witnessing the crazy world that these messed up adults have constructed for themselves.

Putting aside the dubbing, the film was alright.  Not great, but alright.  It was very imaginative, with strange locations that the characters were always coming across, original costumes, and some nice ideas put into motion.  There was obviously a lot of time & effort put into the world in which the action was taking place.  The events of the plot were unpredictable, even a little wild at times.  But at least they kept you on your toes.  The level of violence and stark action was nice; there was a very raw sense to the film, a semi-realistic take on medieval warfare, politics, and brutality.  I guess if I had just turned the volume off it would have made for a better movie.  But then I wouldn't have known what the hell was going on, so never mind. 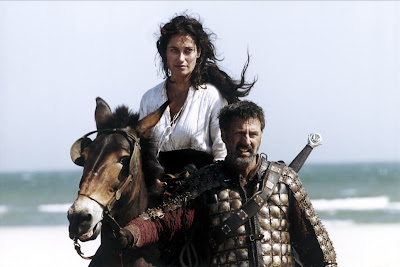 Video - With an aspect ratio of 2.35:1, the picture quality is nice.  Maybe not quite as perfect as you'd hope for, but nice.  The scenery was what impressed me.  The filmmakers had a good eye for the set, and gave us some really great shots.

Audio - You have two sound options here: 2.0 Dolby Stereo or 5.1 Surround Sound.  The film is in French with English dubbing.  There are no subtitles options, but if you had subtitles you'd miss some of the worse voice-overs you're ever likely to hear.

Extras - There are zero extras on this disc. 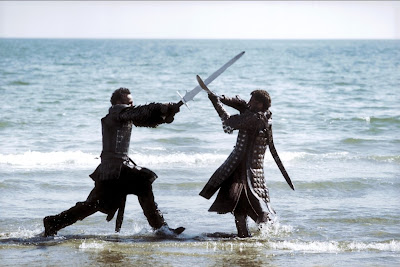 Skip It.  I wish I had watched this film in its original language.  I don't think it would have made it amazing, but it definitely would have helped.  The visuals of the movie were nice, the story was cool, but the dubbing was just so bad it made it almost unwatchable.  The video was good, the audio was fine, and there were no extras at all.  Find a French version; otherwise don't bother.