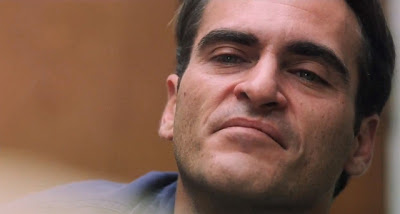 Paul Thomas Anderson is probably my favorite director other than Wes Anderson, their last names being just a coincidence.  The Coen Brothers, Christopher Guest, Woody Allen, those guys are right up there, but PTA just makes near perfect movies that are unlike anything you've ever seen before.  His first film was Hard Eight, which is the only one I've not seen.  His others, in order, are Boogie Nights, Magnolia, Punch-Drunk Love, There Will Be Blood, and The Master.  Those are some of the best movies ever made, in my humble opinion, and I had high hopes for his latest project.  Especially since Philip Seymour Hoffman is also one of my favorite actors, with Joaquin Phoenix and Amy Adams high on my respected actors list.  I must have a thing for non-assassins with three names.  Anyway, I was primed to love The Master.

The main character isn't the master, but the student, a young man named Freddie.  He is an ex-sailor, a vagrant, a law-breaker, a drunk, a murderer, someone who has no direction and no reason to dream.  But his future begins to take shape when he meets Lancaster Dodd, the man everyone calls Master.  He is the teacher of a new outlook on life, a new philosophy that teaches his followers how to revisit their past lives and experiences, and to use them to make themselves happier people.  Many call this unique group a cult, but for Freddie it fills a hole inside him that he's had for his entire life.  Freddie gives himself to the cause, to bettering himself, and to a special relationship that begins to form between himself and the Master.  But his old life and his old wandering ways have never quite disappeared, leaving him torn between self improvement and self destruction.

At first I was a little concerned.  It was beautiful and dramatic from the very beginning, but it actually felt more like a Terrence Malick film (The Thin Red Line, The New World, The Tree of Life) than a PTA film, and that's not good.  I hate the way the Malick's movies are so self indulgent, so purposelessly pretty.  And that's the way The Master felt at first, but luckily that didn't last long.  When Freddie (Phoenix) met Master (Hoffman) everything changed.  The fast-paced, music-driven dialogue started humming, the scenes became crisp and unsettling, and the movie started to feel the way I imagined it would.  The acting in this movie is some of the best you are ever going to see.  Not for one second did I think of them as actors.  Well, maybe Amy Adams, but that's not really her fault.  She was strong too, just not as perfect as the two main characters.  And the film itself wasn't exactly perfect either.  It lacked the strange humor of Boogie Nights, Punch-Drunk Love, and even There Will Be Blood that relieved some of the pressure off of the intensity of the story.  Magnolia was like that, excellent but maybe a little too heavy.  The Master was the same; a great movie with amazing acting that could have used something to take the edge off of what became a very deep and dark story.  This film isn't for everyone, but it's one that I'm still going over in my head and would watch again.