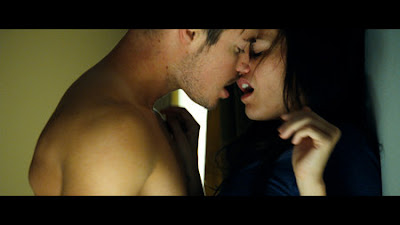 
Some movies you can tell just aren't going to be any good.  They may end up with some redeeming qualities, but there are certain signs that point towards crap.  Two young, attractive, unknown lead actors?  Yes.  Two mediocre veterans meant to lend some credit to the film?  Yes.  A story set in a small town in Texas where everyone knows everyone?  Yes.  These all seemed like red flags to me, and when I watched the trailer I was even more confident that this movie wouldn't be anything wonderful.  But I also thought that it ought to be entertaining, fast-paced, sexy; a fun way to spend an hour and a half.  Well, I was wrong on one of my assumptions.  Guess which.

It's young love at its finest when the handsome Billy falls for the beautiful Sarah.  She's a waitress, he's a who-knows-what, but a passionate night brings them together and they seem to have fallen hard for each other.  But their idyllic situation is rocked when Sarah's friend ODs, dies, and leaves her in a tight spot.  Call the police?  Run?  Or maybe open her mail, find a letter of inheritance, and hatch a deceitful plan that could make the young couple very rich.  You see, Sarah looks remarkably like her friend and could pose for her easily.  So Sarah & Billy head to Texas to claim the inheritance as their own.  Sounds too good to be true, and of course it is.

Things are not so cut-and-dry in Tremo, where this long-lost relative has died.  He left behind a lot of money, but also many secrets and a lot of people who want a piece of the pie.  Sarah & Billy soon meet the brothers who run the town: Cameron Brogden the lawyer and Robert Brogden the sheriff.  While friendly at first, it soon becomes apparent that they have agendas of their own and that the young lovers will not be getting their hands on the cash as quickly as they had imagined.  Lies abound and cover stories unravel, as everyone's true motives are slowly revealed and the twisted plot races toward a resolution that will definitely not be amicable.

Where to start, where to start.  The production of the film, I guess, since that was as bad as everything else.  First off, director Antoni Stutz has only directed one other film, 2001's You're Killing Me... starring former porn star Traci Lords.  You gotta start some time I guess, but the film made it obvious that he was an amateur.  It was more like a copy of a movie than an actual movie.  I take that back; more like a copy of a made-for-TV movie than an actual movie.  It felt stolen instead of created, with no hint of originality.  The whole small-Texas-town thing is so cliche, it's got to be impossible to do it well.  And adding a yellow filter over your camera lens didn't make the boring, typical scenes that you're shooting seem any cooler.  From start to finish the film was a rip-off of so many that have come before; just one more "thriller" with no substance and no saving grace.

I guess I'd have to blame the acting for taking the movie from bad to awful.  I mean, it obviously wasn't going to be great, but it could have helped itself out a little by having actors who were the least bit likeable, believable, or talented.  Josh Henderson was especially poor as the seemingly simple-minded Billy.  It was like he was reading lines in acting class, not performing in an actual movie.  His counterpart, Haley Webb, was actually OK.  She was pretty at least, and not horrible anyway, but the two of them had such bad chemistry that it felt a little weird every time they touched each other.  Quinn & Bridges, the veterans, were exactly what you'd expect; about as exciting as mannequins taught to speak.  Neither one of them brought anything to the film except a recognizable name.

It all culminated in a badly acted, messy muddle.  The story was hard to follow, the characters weren't fun to watch, and the movie fell very flat.  And there's where I was wrong in my assumptions.  I thought that the film looked throw-away, but that it would have some fireworks.  Some cool violence, a sex scene, tense or scary moments.  But no, I was wrong about that.  Instead it was overly serious, strange, and at times pretty boring.  I was left not really caring whether or not any of the principles got any money, got away with murder, died, left, disappeared.  I guess I just gave up at some point.  And judging by how well the film turned out, maybe they all did too.

Video - With an aspect ratio of 2.35:1, the video was quite nice.  The film was shot on an Arriflex 35 BL4 using Cooke and Angenieux lenses, and also a Clairmont camera using a Clairmont lens.  The quality of the picture was top notch; crisp visuals, nice clarity.  The movie was a bit too yellow for my taste, but then maybe that was an artistic decision.

Audio - The film was done in Dolby Digital, with an option to choose English 5.1 or English 2.0.  There are no subtitles choices or any other audio options on the disc.  The sound quality of the film is fine, nothing to report and no problems.

Extras - There is only one extra on the disc; Behind the Scenes: "The Making of Rushlights".  It's only four minutes long and doesn't really add anything to the movie.  There are no other extras. 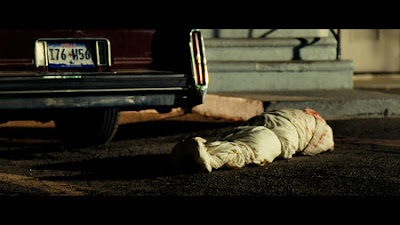 Skip It.  There's really no reason to watch this movie.  It looks bad from the beginning, only to get worse when you realize that there aren't any cheap redeeming qualities.  The video is nice, the audio fine, and the extras limited.  Don't rent Rushlights with the hope of having an entertaining evening.  They say it's based on actual events, but that's a pretty loose phrase, and it doesn't effect the outcome.  It's not awful enough to be funny, it doesn't deliver enough to be good, and it's not provocative enough to warrant your time.