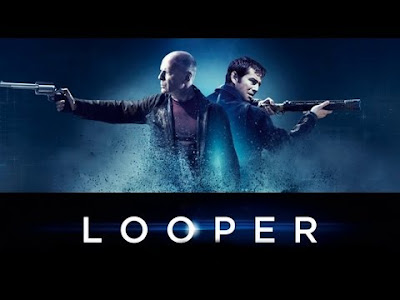 
This was one of those movies that I knew I had to see as soon as I watched the trailer.  Not only am I a sucker for dystopian futures, but I also love time travel and Joseph Gordon-Levitt.  And what he was attempting to do in this movie was pretty ambitious.  JGL would become Bruce Willis, as they played the same character from different times.  He would morph into this other man, and that was something I wanted to see.  And Looper also seemed to have an Inception vibe to it, which I loved, and I was looking forward to seeing another twisted take on a cool sci-fi premise.  So here I am just shy of a year after the movie came out, finally seeing it.  The first half of the movie delivered everything I was hoping for; a great story, good action, it forced me to think.  But then the second half started, and I wasn't as pleased.

The year is 2044, and crime has become law.  Mob bosses rule the cities and their employees hand out the justice.  One career of the future is that of Looper, a very strange occupation.  Apparently in the 2070s time travel will be invented.  It will be immediately outlawed, but the crime organizations will use it at will.  What they do with it is pretty ingenious; anyone they want dead they send back in time, back to 2044, where a Looper is being paid to kill the mark, dispose of the body, and wake up to do it all again the next day.  At some point every Looper will be sent his own self to kill, which is called 'closing the loop'.  You close your loop, get a huge pay day, go have fun for thirty years, and prepare for your imminent death.  All this is fine with Joe, until the day his own loop is sent to him, escapes, and turns his whole world upside down.  Now he must find himself, kill himself, and figure out what the hell is going on.

What an awesome story.  The whole idea of Loopers is just so cool, and the way they are portrayed in the movie really makes you want to be one, despite the guarantee of death at an early age.  JGL was the perfect Looper; young, cocky, handsome, but insecure.  And the way they made him look like Bruce Willis was phenomenal.  The makeup was good, but what's impressive is how much he must have studied Willis, because he talked and acted just like him.  So when his future self came back, the scenes between the two of them were eerily awesome.  However, that's kind of when the problems started.  The beginning of the film was so excellent I didn't want it to change.  But when Bruce Willis came the story started getting muddled and the acting talent was definitely lowered.  Not that Willis is terrible, but he wasn't good in this one.  And the plot quickly lost its originality, adding in a love interest, a kid, cheesy heroism, extra sci-fi elements.  They just weren't needed, the base story was strong enough on its own without forcing in some Hollywood.  The first half was great, the second half was just OK, so I'm left a little torn.  At the very least, Looper is a movie worth watching if you like sci-fi/action/time travel movies.  It's just not as wonderful as I had hoped.