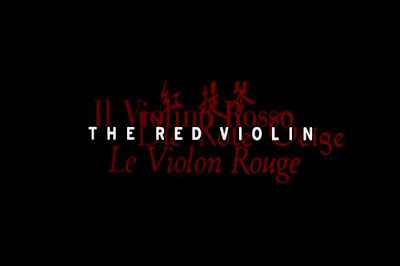 
For some reason I thought this was a Samuel L. Jackson movie.  I mean, it is, but it isn't.  When I went to watch it and saw how far down the cast list he was listed I was confused, but then the movie started and I got it.  Jackson isn't a main character, at least not any more than anyone else.  The film really doesn't have any main characters, other than the violin.  It's a story of time, of legend, of history, and it's told through the instrument, not the people who play it.  Anyway, I was pleasantly surprised by the set up of The Red Violin, it was interesting in a way I can't remember seeing before.  And good thing too, because it's really the method that makes the movie.  I'm not going to call it a gimmick, because that would be insulting to a movie that I did enjoy, but take that one aspect away and you're not left with much.  But the title makes it clear, the story is the violin, and there's no separating the two.

Over the course of the film, we follow one perfectly crafted violin throughout hundreds of years of its life.  The instrument is crafted in Italy by the master Bussotti for his wife and unborn child.  From there it travels to Austria into the hands of an orphan virtuoso who lives at a monastery.  On it goes with a gypsy caravan, and into the possession of an English nobleman named Pope.  It travels then to China, and survives the Cultural Revolution.  And finally, the violin is brought to auction in Canada, where each stop in its life is represented by a different buyer.  The history of this magnificent instrument has been bloody, tragic, cursed perhaps.  But it has always brought with it a beauty that can't be denied, a clarity of music that transcends the trivial humanity around it.

I was very surprised by the flow of the film, and it kept my attention very well.  We see the auction taking place and the violin for sale, but only slowly do we understand why each party is bidding for it, why the history of the violin is so important to them.  We see the events around the world unfold one by one, but always with an undertone of futility, as we know that the instrument won't stay in one place long.  And its creation in Italy sets the stage for its tragic future, with flashbacks of an ancient seer predicting each stop in time.  So the set up really made the film.  The acting was secondary; it was fine, but nothing special, with Samuel L. Jackson being the most unbelievable and stilted.  The time periods were excellently represented and portrayed, impressively becoming mini period pieces that could have been movies all their own.  And the music was, of course, incredible, as long as you like the violin.  All in all a refreshingly unique film that swept me away and made me ponder the deeper meaning behind the desire for & brutal impact of what was ultimately just a well-made box of wood.