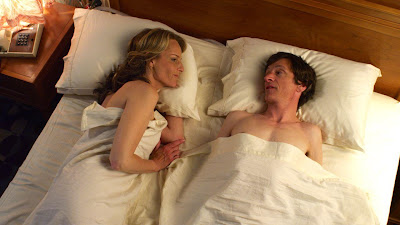 For a movie that got a lot of Oscar buzz last year, it sure didn't get a lot of Oscar credit.  Helen Hunt was nominated for Best Supporting Actress, and that's about it.  No Best Picture, Best Director, or Best Actor for John Hawkes.  Everything seemed to be there for this movie to be a big award winner; true story, very difficult lead role, an actress outside her comfort zone.  But neither audiences nor critics really got on board.  It seemed like this racy movie really didn't do much more than simply entertain, and after watching it I can say that that is pretty much exactly right.

The story of the film is based on an actual article by Mark O'Brien about his experience with a sex surrogate.  Mark had polio when he was young and is confined to a gurney and an iron lung.  He is a journalist and a poet, and when he begins to write a story about sex in the handicapped world, it opens his eyes to his own lack of sexual experience.  He decides to have sex at least once before his imminent death, and he hires a surrogate to make it happen.  Cheryl isn't a prostitute, she is a therapist, attempting to open up Mark's sexual being within six intense sessions.  As he battles with his Catholic guilt over sexuality, he must also fight his uncontrollable body, trying his best to find love and pleasure in a very unlikely place.

As you can probably gleam from the summary, the central theme to this movie is sex.  Helen Hunt is naked throughout, there are some very explicit discussions, and the characters discuss sexuality alongside morality, religion, and nature.  That said, the film is also about love and attempting to feel normal when your life is anything but.  As far as that goes, the actors do a great job telling this true story.  It's very interesting and engaging, having a fast pace and good detail.  But, and here's the catch, it's nothing special.  I was expecting a little more, something deeper, less Hollywood.  But it turned out to be a regular movie about a sexual topic.  William H. Macy was a little cheesy, Helen Hunt did a weird Boston accent, and John Hawkes spouted too much poetry.  Everything was just OK and not as ground-breaking as I had hoped it would be.  I can see why it got more buzz than awards, as it just didn't go that extra mile to become atypical.  The Sessions was good, but sadly not great.