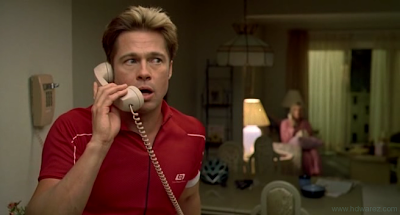 
I'll watch most anything as long as the Coen Brothers are involved, and most likely I'll love it.  Fargo, The Big Lebowski, O Brother; some great films.  Others were just alright: Raising Arizona, Barton Fink, True Grit.  But regardless, this duo makes very interesting and very original films, and Burn After Reading is no exception.  At first it seems like a crime/CIA/covert ops drama, and then the more you watch it the more it feels like a comedy.  By the end you realize that they're mocking a pretty ridiculous genre, using humor to point out what we ought to have been laughing at all these years, yet took so seriously.

The plot is a mess of who's sleeping with who, who's blackmailing who, and what the hell is going on.  Ex-government employee Osbourne Cox recently quit his job and is on the verge of a divorce.  His wife is sleeping with Harry, another DC insider.  Harry is sleeping with anyone he can find, including the very simple-minded Linda Litzke.  She and her equally dimwitted pal Chad happen upon some "serious secret shit", and decide to blackmail Ozzy Cox or sell the information to the Russians.  They, of course, are in way over there heads.  People are followed, blood is spilled, secrets are revealed, and nothing is easy as the situation spins out of control.

Burn After Reading is one of the best spoofs you'll find.  It pokes perfect fun at the classic FBI intel storyline and the nonsensical plots that always emerge in them.  If you didn't have a sense of humor you might actually believe that this was a serious film, because it sticks to the genre so closely.  But, of course, it's actually a comedy and everything the characters do is designed to mock and amuse.  It's a hilarious movie; Brad Pitt & Frances McDormund are great as the bumbling blockheads who think they can outwit the professionals.  John Malkovich & George Clooney are equally excellent as the paranoid G-men who really have no idea what's going on.  Sometimes the humor goes a little over the top, but it's all meant to show us how utterly insane we must be to believe any story like this for more than a second.