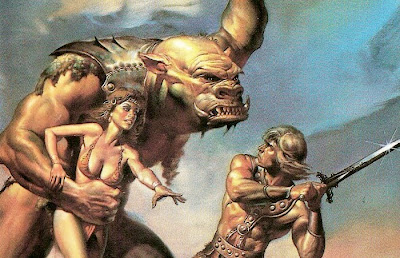 
The great thing about awful 80s movies is that I didn't see them when they first came out.  I was either unborn or just a baby, so I missed the hype, the fad, whatever it was.  And what a fad it was.  This particular sci-fi/action/fantasy/adventure genre was extremely popular in the early 80s, with films like Conan, Beastmaster, Red Sonja, Legend, Masters of the Universe, and of course Deathstalker.  I saw these movies when I was around ten, after the hype had died down and I was able to enjoy them as only a kid can.  And for that purpose, entertaining a ten-year-old, they are great movies.  Deathstalker was one I never saw when I was young, and good thing too, because it's more adult then the others; more bloody, more booby, more ridiculous, and ultimately more entertaining.

Deathstalker is one of the last remaining heroes in the world.  With the great wizard Munkar ruling the land, people have started fending for themselves, creating chaos, thievery, bandits, and putting an end to the age of chivalry.  But admit it or not, Deathstalker is a true hero, and only he can defeat the evil Munkar.  He must go on a quest to find the three sacred powers: chalice, amulet, and sword.  Once they are all together, Stalker will become the most powerful being in the world and can banish evil.  Problem is, Munkar already has two of the three powers, and he's not letting go of them easily.  With the help of his allies, Deathstalker must defeat Munkar and free the world from tyranny.

Now this is what I'm talking about when I ask for a great b-movie.  It was everything I hoped it would be; silly, gory, quotable.  It was filled with sword fights, trippy magic spells, naked women, ugly barbarians, mud wrestling, hand puppets, decapitations that cost one dollar to create, you name it.  Glorious, really.  And it never, not for a minute, took itself seriously.  It was almost mocking of the others in its genre, whether intentional or not.  Like I said, I wasn't around to see it come out, but watching now I get the feeling that the people who made this movie knew that it was pretty absurd.  And so I didn't mind it, which I guess is the point.  In order to make a great b-movie you have to accept what you are, run with it, and go over the top.  Deathstalker did that perfectly, making it a horribly awesome movie.