I can't remember the last time I watched a Wesley Snipes movie, and I'm pretty sure that's a good thing.  I don't think it was as far back as White Men Can't Jump, which may have been the only role that he was ever believable in, but that might not be far off.  He's just an awful actor who chooses horrible projects to attach his name to.  I tell you my feelings now so you'll know I watched Gallowwalkers from a biased perspective.  But honestly, I'm not sure it would have mattered.  Wesley Snipes or Daniel Day-Lewis, I doubt anyone could have turned this movie into something worthwhile.  I'm sure putting someone as bad as Snipes into your lead role didn't help, but it probably didn't hurt much either.

The story follows Aman, a western warrior who cannot outrun the curse that chases him.  This gunslinger was once the son of a wild woman, but she was forced to give him up when she joined a secret society of nuns living in the dessert.  Growing up in a slaughterhouse, Aman fell in love with his caregiver's daughter and they planned the wonderful life they would lead together.  However, all of that was taken away when a group of bandits attacked the farm while Aman was away, stealing the young couple's dreams and shattering their peaceful lives.  Driven by vengeance, our hero tracked down the villains, attacked the prison in which they were captured, and killed them all one by one.  His revenge was complete, but the story was not yet ended.

In once saving Aman's life, his mother has caused a curse to be visited upon him.  Those who he killed with his gun were able to return to life, becoming undead beings with vengeance on their minds.  Now the group of outlaws have returned, and Aman must kill them again, once and for all.  But it won't be so easy a second time.  They are led by the powerful Kansa, who seeks a method of returning his dead son to life as well, allowing father & son to be reunited.  Aman must find help if he is to survive the retaliation of the undead and destroy them once more, and that helps comes in the form of a young cowboy named Fabulos.  The pair must hone their skills and outsmart their enemies in order to defeat death and put the evil curse to rest.

It's exactly as bad as it sounds. The story barely made any sense at all, was set in some strange pseudo-West, and relied heavily on the belief that if killing someone once didn't work we would all agree that they must be killed again.  I'm not so sure I wouldn't have just given up and moved away.  That's basically how I felt during the majority of the movie; like giving up.  The plot was just so silly.  And not only that, but it was unfolded poorly, acted badly, and never hooked me.  I really didn't care that Aman's past was sad, that his home was attacked, or that he felt he had to do something about it twice.  It's the film's job to make me like it; it's not my job to work at finding something worthwhile to latch onto.  And if it were, I would have been hard-pressed.

It definitely wouldn't have been Wesley Snipes' acting that allowed me to look past the other flaws of the film.  He's literally terrible at delivering lines, and since that's half of an actor's job I start to feel that special kind of anger that only comes when someone else in making millions of dollars for doing something that I could do better myself.  I'm mad that he's rich & famous, I'm not, and yet I could also have posed in the dessert with one leg cocked out pretending that I was a bad ass.  I'm not saying I'm a great actor, I'm saying that neither is he.  I guess these are the perfect kinds of movies for him, since he really can't make them that much worse, but I can't help giving him the majority of the blame for what turned out to be a pretty strange and crappy film.

And it wasn't even all bad, just mostly so.  There were a few bright moments that, sadly, were covered up by the large amount of bad ones.  The set was actually pretty cool; an alternate wild west landscape laid out across long desserts and rolling hills.  And the weird culture of the area was kind of interesting; it might have made for a good short story or graphic novel.  It had that feel to it, with some cool shots and a nice amount blood.  It was an odd mix of Blade and Mad Max that never really turned into a coherent film and left me more frustrated than bored.  There was plenty of action, it just seemed pointless, useless, and not very well thought out.  And I guess that pretty much sums it up.

Video - With an aspect ratio of 2.35:1 Widescreen, the video is a really nice quality.  The film was shot using a Panavision Panaflex, and the picture comes across clear and clean.  The set lends itself to a nice visual, with plenty of sunlight, good contrast, and crisp action.

Audio - The film was done in English 5.1 Dolby Digital audio, with an option for either English or Spanish subtitles.  The sound quality of the film was fine, with some good background music and no glaring problems.

Extras - There are few extras on the disc.  Behind the Scenes With Interviews is a ten-minute, self-explanatory segment that gives a little insight into the film.  And Also From Lionsgate shares three trailers: Warm Bodies, The Revenant, and Chaos. 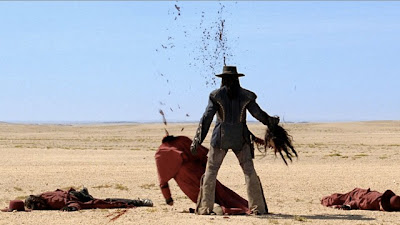 Skip It.  Gallowwalkers just isn't a very good movie.  Its plot is shaky, the acting is fairly awful, and when it was over I just didn't care.  The story is slightly interesting, but it's badly done.   Wesley Snipes didn't help a bit, delivering every line with blunt force and fake emotion.  The video was nice, the audio was fine, and the extras were pretty boring.  I can't recommend this movie to anyone, unless you just want to see Snipes pretending he's a cowboy.  That's about all it's good for.