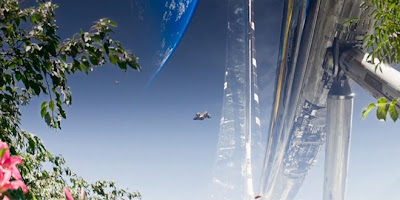 
You can't talk about Elysium without first talking about District 9.  Done four years ago, it was Neill Blomkamp's first feature film, and it was an amazing success.  It got great reviews from both critics & audiences, and I really liked it.  It was such an original way to make a point, using aliens to represent apartheid in South Africa, forcing the main character to physically transform, making audiences watch some horrible reality.  Sound familiar?  If you've heard much about Elysium you'll recognize a very similar plot and message; class warfare, metamorphosis, sci-fi action.  The two movies have a ton in common, which is fine.  Write what you know, right?  But Blonkamp's first attempt at this idea was gritty, surprising, bare-bones.  His second turned out to be a Hollywood rip-off of his own great film; a cliche-driven mess of explosions and forced dialogue that totally corrupted the simple point he has been trying so hard to make us see.

The story is complicated, but the set-up is quite simple.  Earth has lost its beauty & its health, and it is no longer a nice place to live.  Overcrowding, disease, and pollution have made the planet a harsh environment, and so those who can afford to move have left town.  The wealthy have created their own world, Elysium, a space station that is a veritable heaven.  There is no want, no disease, no shortage of any kind, and all the rest of humanity badly want to live there.  Max, an ex-con and blue-collar worker, finds himself in a situation where he must get to Elysium in order to live.  His underground friend Spider is willing to help him, but at a price.  Meanwhile, power on Elysium is up for grabs, and a computer program might be the key to the kingdom.  When Max accidentally downloads the program into his own brain, he becomes the deciding factor in the future of Earth. 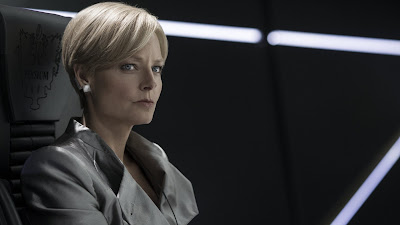 When you compare Elysium to District 9, the former lacks everything that made the latter so great.  The story was strong; the idea of a literally separate class living among the stars was really interesting, and the desire of the rest of Earth's people to get to that level had some very honest things to say about immigration, Third World Countries, class warfare, the works.  So the idea behind the film wasn't the problem, it was the execution.  While D9 was clean, brutal, and simple Elysium was messy, cliche, and over-worked.  It was a summer blockbuster, I guess, when what I wanted was a great film with a good point.  And it could have been that if it had just been stripped down.  The core was strong, but why add a love story, a typical villain, a cute kid, that stupid chanting music that seems to be in every slow scene of every action movie?  None of that stuff was necessary.  The plot was good, the action was cool, but the movie was overloaded with crap that didn't add anything but dead weight.

And the first part that should have been eliminated was Jodie Foster.  I have seen her in some great roles; this was probably her worst.  She was awful as a power-hungry aristocrat who was willing to do the dirty work that the President of Elysium was not.  And she did it all with a horrible accent that I can only imagine was supposed to be French.  Her entire character was unnecessary and just muddled up what quickly became an overcomplicated plot.  Matt Damon was fine, but he didn't need to fall in love.  We didn't need to see him as a kid in an orphanage, we didn't need to get inside his head.  And we didn't need the characters around him: Spider the hacker, Kruger the sleeper agent, Julio the BFF, Carlyle the suit, Frey the pretty girl.  What made D9 so good was that it was simple.  It was bloody, insightful, raw, and used sci-fi to entertain us while making a great point about humanity.  Elysium tried to do these same things but couldn't stop itself from being a Hollywood version of a great film, not a great film itself. 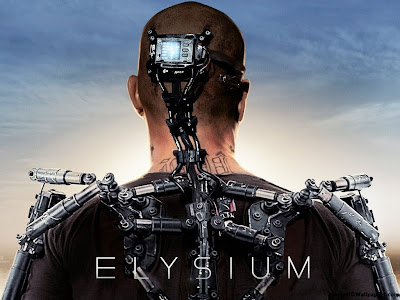