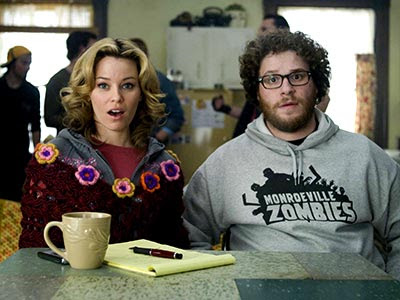 
I was fourteen when Chasing Amy came out, and at the time that was about as adult a movie as I had ever seen.  It was about sex, relationships, friendships, they swore continually, and I felt grown up when I watched it.  It was perfection then and it's still a great movie, but I'm wondering if I actually grew up too much to enjoy Kevin Smith's style and humor.  Clerks, Mallrats, Dogma, Jay and Silent Bob; those used to be some of my favorite movies, but I wouldn't say that any longer.  Maybe I matured past those movies, and maybe Kevin Smith needs to as well.  He did with Red State, a psychotic and original film that I really enjoyed.  But I can't say the same about Zack and Miri, a movie that's funny, vulgar, and juvenile but one that I might have only enjoyed when I was a teenager.

I'm torn, because I respect Kevin Smith and used to find this stuff really funny, but I guess I just don't as much anymore.  It was silly, gross, raunchy, offensive, but not always in bad ways.  It was often amusing, quite surprising, so I can't say I didn't like it.  And I still enjoy crass humor in movies, like This Is the End, but for some reason this certain style has just lost its attraction to me.  I'm sure the acting in the movie didn't help.  Seth Rogen was funny, but wow was Elizabeth Banks horrible.  And so was Craig Robinson, just awful.  There were some nice cameos: Jason Mewes (minus Silent Bob), Jeff Anderson (from Clerks).  But the film as a whole just didn't work.  I was confused more that amused, and at the end my friend said it best when he said, "Well that was special."  I can't say I hated it, but I definitely wouldn't watch it ever again.