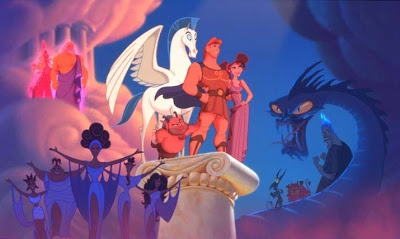 
I guess this was right around the time when I was too old for Disney, when I had put childhood aside for more grown up things.  And I guess right now is about the time when I'm rediscovering all the great kids' movies I missed.  Hercules was one I never saw, one I wasn't even interested in.  I actually sang the theme song in school once, for choir, and remembered it as being good.  Well, when my daughter went through a phase of wanting to learn about the Greek gods and goddesses, I remembered the movie, recommended it to her, and now I've finally seen it.  I have to say I'm sorry I didn't watch it when I was younger, but I'm glad I saw it now.

The story begins with the birth of Hercules to Zeus and Hera.  They are very proud of their strong baby and know that he will make an excellent god.  Hades, however, is not so happy.  The ruler of the underworld is plotting to overthrow the Olympians, and he discovers that the only one who can stop him is Hercules.  He can't be killed, given his immortality, but if Hades could turn Herc into a mortal than he could be easily disposed of.  Well, of course plans go awry, Hercules survives, but is now partly mortal, giving him god-like strength but keeping him from joining his parents in paradise.  As he grows, Hercules discovers his identity and learns that he must become a true hero in order to become a god again.  Easier said than done, but with the help of Phil, his satyr trainer, and the love of Meg, a beautiful woman with dark secrets, Hercules attempts to defeat Hades, become a true hero, and return home.

I was pleasantly surprised by this movie; it was more enjoyable than I thought it would be.  The story was at least partly true to the legend, and had a ton of mythological references that would actually be educational to someone who didn't know much about them.  And like most Disney movies, there were a lot of jokes for adults and shout outs to other films.  The music was pretty good; the main theme, Meg's song, and even one sung by Phil, voiced by Danny DeVito.  Maybe the music was a little muddled, without a real style, but they were at least catchy.  And Hades was a great villain, funnier than Jafar but as twisted.  Overall it was a great Disney movie, one that reminded me of why I love them.