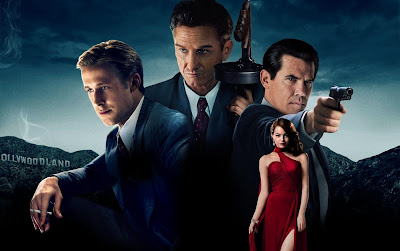 
I try to steer clear of shoot-em-up movies, because they're normally terrible.  I don't mean Quentin Tarantino films, I meet throw-away action films, stupid Jason Statham movies, and gangster flicks.  The last gangster story I watched was Public Enemies.  Read my review of that one to see how it went.  There's just something fleeting about that era that is hard to capture on film, especially without making it seem cheesy & stupid.  I liked the look of Gangster Squad because it almost had a graphic novel feel to it.  Not that I'm a fan of comic books, but I thought it might be an interesting take on the genre, one that would actually give me what I want; a good movie that happens to take place in a cool time period.  Well, that didn't happen.

So here's the story.  The year is 1949, the city is Los Angeles.  Organized crime has taken over the town under the leadership of East Coast crook Mickey Cohen.  He's a Jew, he's a bad ass, and he's taking the city by force.  The police can't stop him because he's bought all the politicians.  No one will testify against him because that's the same as suicide.  So desperate measures have to be taken.  A secret police squadron is formed, led by the honorable Sergeant O'Mara.  He forms a squad made up of clean cops; a wise acre, a sharp shooter, a street smart, an intelligence expert.  Their mission is to take down Cohen's operation, destroy everything, kill anyone, while leaving their badges at home.  But will they succeed, or will the gangsters win the war?

So it didn't end up having a graphic novel feel.  It didn't end up being cool, having substance, nor was it any good.  It was just another crappy tommy gun movie, in which a million bullets are fired and nothing really happens.  There was a plot; take down Mickey Cohen.  But there wasn't really much of a story, it was more like action happening along the way.  I never cared whether or not they succeeded, and I never saw much that set it apart from The Untouchables, a far superior movie.  And the acting, oh man.  Emma Stone was worthless and horrible.  Josh Brolin was leaden and dull.  Sean Penn was OK, but it was more weird than good.  Ryan Gosling was the only stand out, and he was the only one who wasn't phoning it in.  I just don't like this type of movie, and it's because they're usually so bad.  Someone make a good one, please, it can't be that hard.