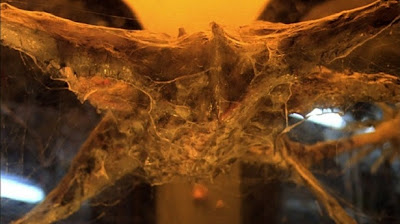 
On my tour of 80s fantasy movies, I made a stop over at 80s sci-fi.  It's a pretty good genre, but the only problem is that every film resembles Alien in some way.  It's amazing when you think about it, how important & influential Alien was to every space/alien movie that came after it.  For a minute while watching Forbidden World I thought, "Wow, this was made in the early 80s, Alien must have taken a lot of its ideas from this movie!".  But I guess I forget that Alien was made in 1979.  I'm sure there are other movies that inspired it, but that film remains a highly copied & coveted piece of sci-fi cinema.  So while Forbidden World was a pretty good flick, it owes a lot to those that came before.

The story takes place in the far future on a distant planet.  In a government research facility, very important scientific work is being carried out.  The team there is attempting to create a genetically altered super food to combat the galactic food shortage.  They have succeeded in developing a highly productive mutant gene, but there's just one problem; they can't control it.  As the "thing" changes from one form to the next, no can predict what it will do or how it will try to survive.  When a government agent is called in for support, he finds himself in a confusing fight for survival, as the scientists want to save their long years of work, while he just wants to kill it before it kills all of them.

This film was also called Mutant, which makes much more sense.  There's no forbidden world, but there is an ugly killer mutant who eats everything in its path.  I actually liked this movie, despite its Alien plagiarism.  It was funny, slightly clever, and not horribly acted.  It had a few awesomely bad classic scenes that I'll remember for a while, and I'm a sucker for space plots in small spaces; again, very similar to Alien.  Incidentally, the very first scene of the film reminded me a lot of Prometheus, the Alien prequel that came out in 2012.  But taken on its own, Forbidden World was a fun early sci-fi film that started well, got a little too bloody & screamy by the end, but was entertaining throughout.