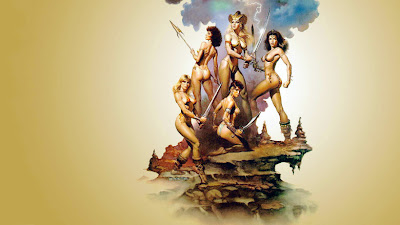 
I might have a new favorite genre.  These 80s fantasy movies are just so awesome.  So bad, but so awesome.  They are extremely short, the stories are simple, the action is funny, the actors are eye candy, and it takes zero effort on the part of the viewer.  I'm not usually one for watching movies or TV shows in order to "veg out", I like to be challenged in some way.  But with this genre I can see the benefit of just watching them to waste an hour in a semi-enjoyable way.  Now, that's not to say that every single one of these action-adventure flicks are the same quality; some are an entertaining romp and some are big dull duds.  But regardless, I never really feel cheated, tricked, or annoyed when I watch one of these movies, good or bad.  I always have a fun time, get to laugh at some extremely silly scenes, and turn it off happy.

Barbarian Queen is yet another 80s fantasy epic based around the idea that everyone in ancient times fought with very little clothing on.  In a tiny village in the countryside of a mighty Empire, a prince and princess are about to be married;  Amethea, the beautiful maiden, and Argan, the heroic warrior.  But their nuptials are cut short when their village is attacked, their people slaughtered, and many dragged away to become slaves.  Amethea survives, and along with a small party of women warriors tracks the killers with the goal of freeing her people.  When she meets up with the Rebels, she realizes that her's is not the only tragic story, and that the people of the realm are ready to rise up and defeat the evil Empire.

This movie was almost an exact copy of Deathstalker, with a little less magic and a few more Amazonian heroines.  It was really just a girl version of the earlier film, complete with harems, drunken revelries, evil overlords, castle courtyards, and freedom fighters.  The only problem was it wasn't as funny.  It was a bit more realistic maybe, though I use that word lightly, and it didn't have enough creatures or fantasy.  It needed that fantastic element in order to make it a little lighter and easier to laugh at, since it obviously wasn't made to be an Oscar winner.  But I had a good time watching it, even though I knew it was bad.  It wasn't quite the stellar b-movie I had hoped for, so I can't recommend it over others of its genre, but it was a pretty good example of 80s fantasy fluff.