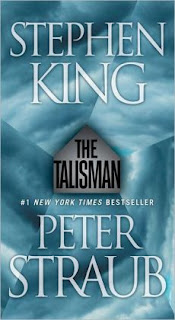 I think I've said it before, but I love me some Stephen King.  He's the greatest fiction author of our time, and the reason I can say that with such confidence is because so many people agree.  With each book he can do something that almost no one else can do; reach wide audiences who just want to be entertained and speak to small audiences who are looking for deeper meaning.  His books are creepy, scary, gross, page-turners, but then there's an element that exists if you care to look for it that gives readers more than what appears on the surface.  His short stories are my favorites, because he can create a mood and backgrounds so quickly, give you an emotion, and set you loose.  So I've read most of his novels, novellas, short stories, Bachman books, and now his co-authored work.  I expected great things from The Talisman, and I was not disappointed.

The main character of the book is Jack.  His father is dead, his mother is sick, and for some reason the pair of them are on the run from his Dad's business partner, Morgan.  Something is going on that Jack just doesn't understand, but he's about to become immersed in it.  When he meets a guy named Speedy his eyes are opened to another world, a parallel existence where many people have a "Twinner", basically another you in another dimension.  This amazingly stunning world and ours are close to each other, with a few people able to flip back and forth between the two.  But trouble is brewing, as Morgan is attempting to take control of both worlds, while killing the Queen there and Jack's mother here.  Jack must go west, travel across a dangerous foreign landscape, and retrieve the Talisman if any of the worlds that exist simultaneously have any hope of survival.

What a great story.  I'm not sure how the partnership worked or who wrote when, but whatever they did worked.  I was hooked from the beginning and never let go.  Jack was a great character, a plucky pre-teen who is stronger than people think and funny to boot.  His quest was just so cool and I'm sure I would have loved this book even more had I read it fifteen years ago.  For fans of the Dark Tower series, there weren't any connections, but there were definite similarities; the blasted west, the strange train that crossed it, Jack/Jake, a unique dialect that I found myself wanted to speak in.  There were a few times where the book lagged, using tricks that I didn't think were necessary, like switching chronological events up.  But those flaws were minor and the book as a whole was fun to read, captivating, and offered a lot to think about if you care to go deeper.