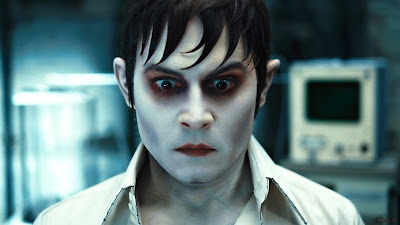 I like Tim Burton as much as the next guy.  He's done some great movies: Edward Scissorhands, Big Fish, Sweeney Todd.  He obviously has a talent for the dark and the disturbing, even showcasing a feel for the dramatic & sensitive at times.  But I'm getting a little tired of he and Johnny Depp getting together and making spooky movies.  Charlie and the Chocolate Factory, Sleepy Hollow, Alice in Wonderland, and now Dark Shadows; it's just getting to be a bit much.  Audiences are getting bored of the same pairing, the same morbid comedy, the same dark style.  And I think with this film they finally hit a wall, one that might make them realize that their relationship needs a break.

Dark Shadows was originally a Gothic soap opera that ran in the late 60s.  It has since become a cult classic and a favorite of many Hollywood filmmakers, including Burton and Depp.  In this remake, the story revolves around Barnabas Collins, a once-wealthy Englishman raised in America where his family set up a prosperous business in New England in the 1700s.  Spurning the advances of a witch, both he and his lover are cursed; she to her death and he to immortality as a vampire.  Fast forward to the 1970s, where the Collins family is about to go broke and the evil witch is still alive in Collinsport.  Barnabas must help his family regain their prestige, all while adjusting to the culture shock and battling the evil woman who still claims him as her own.

The movie version is labeled as a comedy/horror.  Well, there's plenty of soft core horror; neck biting, werewolf fights, ghosts floating about.  But there is almost no humor whatsoever.  The beginning of the movie is funny for about one minute, as Barnabas tries to figure out television and McDonalds.  But that only gets a quick chuckle, followed by over an hour of dumb jokes and odd comedy.  It just wasn't very funny.  And it wasn't very gruesome either, so what you're left with is a movie that fails to do anything well.  It wasn't awful; Depp was typically good, Green was sexy & evil.  But the movie wasn't funny enough, it wasn't dark enough, it wasn't special enough.  It was more throw-away than Tim Burton's films usually are, and I think he and Johnny Depp need to go their separate ways; try news ideas, come up with something original, and generally start making good movies again.