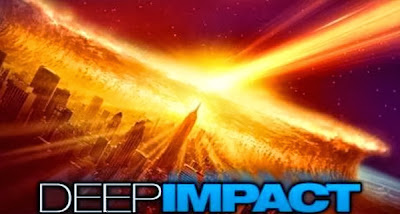 
I can remember very clearly when this movie and Armageddon both came out in 1998.  The latter was the blockbuster, having the hit song to back it up, the big actors of the day to pull in audiences, the summer opening.  The former had Tea Leoni.  You can see why Deep Impact might not have been as big a success.  It actually opened a few months before its competition and ended up making a pretty nice chunk of change, but when you think about the disaster movie of 1998 you think about Ben and Liv and Bruce and Aerosmith, the whole spectacle.  But for my money, Deep Impact is the better movie, if only by a small margin.

The story follows a plucky American reporter named Jenny Lerner who stumbles upon a government cover up that she plans to reveal.  Problem is, she's gotten in way over her head, accidentally discovering the biggest news in history.  Apparently the world is about to end.  There is a giant meteor falling through space and headed straight toward the Earth.  The world governments have a couple of plans in place to deflect the cataclysmic comet, but they've also developed a back-up plan; caves in Missouri and around the world have been constructed to house millions of people, to ensure the survival of the species if the Earth's surface should be annihilated.  Humans frantically try to change their fate, all the while preparing to become nearly extinct.

I think what raises Deep Impact above Armageddon is its pace.  It's not over-dramatic, slow, character driven, and emotional until the end of the film.  Most of the movie is details; how would we stop an event like this, what would we do to survive, how would people react.  And Armageddon was the opposite; a love story, tears, bravery.  Now, this movie had those, but a lot of it came toward the climax when I'd already become invested in the plot and wanted to see how it would all shake out.  Sure I'd seen the movie before, but honestly I didn't remember much.  So I was into it and enjoyed myself throughout.  I'm not trying to say that this is a phenomenal film, no way.  Elijah Wood & Leelee Sobieski as young lovers?  Pass.  Tea Leoni as the lead actress?  Pass, pass, pass.  Morgan Freeman was good as the President, but the movie as a whole was driven by the story, not the actors.  It ended up being an entertaining two hours, ones that I don't regret spending.